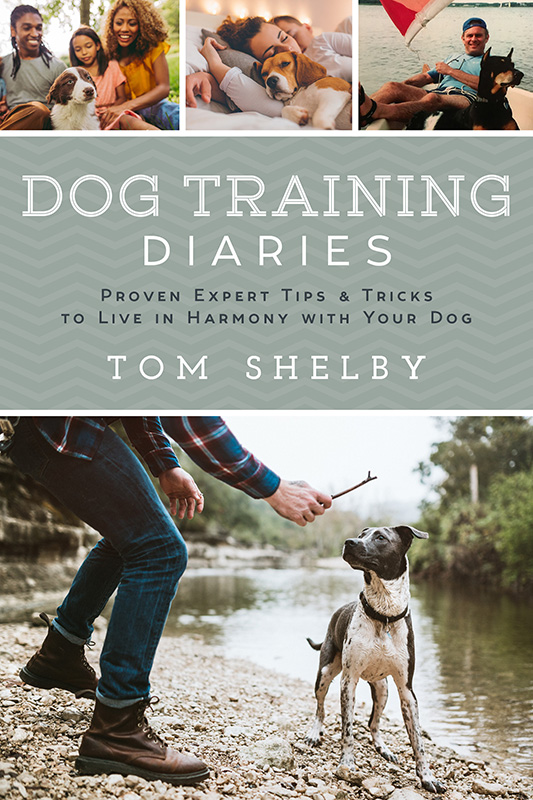 There are lots of books about dogs. How to choose the one for you. How to feed, house, and train him. How to carry on when the dog you dote on dies. At the same time and understandably, there is a sad absence of books written by dogs, which is a bitter impoverishment of humankind. Our lives with dogs would be improved immeasurably by a series titled “How I Got My Goofy Owners to Shape Up,” by Mutt. Or his handy illustrated pamphlet, “What I Learned by Letting My Owner Kiss Me on the Nose,” or another certain bestseller, “How to Persuade My Human That I Am Sad and Need a Treat — With Just One Look.” We have so much to learn, and they have so much to teach.

It’s not in the cards, so we might do worse than turn to Tom Shelby for comfort and instruction in the sometimes frustrating relationships we have with the family pooch, who seems to have a mind of her own. Shelby is a proud and hugely satisfied veteran of the effort to harmonize the mutually dependent relationship between mankind and caninekind. He’s trotted dogs in front of Westminster Dog Show judges. He has particular experience training and working with search-and-rescue dogs. He’s taught their owners how to keep “celebrity pups” in line. And he keeps more than 800 $265-an-hour training appointments annually with dog owners whose myriad dilemmas are never new to him. It is the owners not the dogs, that account for most of the time and most of the money.

From trailer parks to fancy spreads owned by the rich and famous — or “RAFs,” as he fondly calls them — and of course to the dog-dotty residents of Martha’s Vineyard, our own favored realm, Shelby’s bonafides show that he has trained dogs of all economic and cultural backgrounds, chiefly by training their owners. Martha’s Vineyard Times readers will recognize Shelby as their trainer in his ‘Ask the Dogcharmer” column in the paper. Others will remember him as a judge at the Martha’s Vineyard Agricultural Society’s annual fair. Apparently, we and the RAFs may differ in some important respects but, like them, we need all the help we can get civilizing our dogs. “Dog Training Diaries” is a catechism for dog worshippers.

Even the most faint of heart dog owners who indulge their pets’ failings and misbehavior and prefer to explain rather than correct them may discover strategies in Shelby’s comprehensive canvas of canine mischief and obstinance that will be tolerable to attempt.

His approach is generally to take what the delinquent dog gives him and turn it into a transformative moment. No strong-arm tactics, no yelling. For example, Bob, a dog who is friendly to guests until they rise to leave, then fusses, obstructs, and even restrains them from escaping — even the father of the household can’t leave for work in the morning without a struggle. It’s as if Bob were a canine cop holding the visitor captive until the armed, two-legged officer catches up. Shelby instructs the owner to tie Bob to something in sight of the door and give him a marrow bone with meat buried inside. The animal sees the guest depart, but he is deeply involved in getting that bit of meat out of the bone. “It took about two weeks until Bob ran to his tie-down spot and looked forward to Dad’s leaving for work,” Shelby explains.

Socialization is key. “This is critically important. The most stable dog is afraid of nothing, so if they are exposed to everything and nothing bites them, their attitude becomes ‘Been there, done that, seen that, no big deal!’ That’s what you want.” It is, but how do we get it?

Of course, success has a great deal to do with treats. Paula Jean, a standard poodle, was startled by things she hadn’t seen or heard before — a life-size statue of a cow, the sudden eruption of rock music at a fair. Shelby explains that in the immediate moment, he moved Paula Jean half a football field away, to where the music was audible but not deafening. Then he “redirected her attention into earning some treats for a little obedience (OB) work: sit, stay, down, etc. We also played a little tug-of-war game, which is often a good confidence builder. Being happy and playful with a little OB thrown in, I worked our way back to the band by redirecting her attention to me and having fun and treats while ignoring the music. We ended up standing in front of the band for their last couple of minutes playing, and the drummer was happy to give Paula a treat at my suggestion.” You sigh, but remember Shelby must have spent years of trial and error developing this careful, step-by-step approach.

From housebreaking a pup to keeping your grown-up friend from “rolling around in disgusting stuff” to managing the end of his life, and everything you’ve worried about along the way, and tried but failed to fix, Shelby has an approach and an experience that informs. If only you can discipline yourself to follow his lead.

Describing the moment when the friend you’ve loved all these years has loved you but cannot go on, Shelby suggests the underpinnings of his training philosophy: “I suggest that you not share your depression with him, adding to his discomfort. Bear in mind that there’s no domestic animal that reads the body language and voice intonations of humans better than dogs. He reads your voice, your eyes, your whole body. If you’re sobbing and wailing while hugging your ailing dog, it’s not going to make him feel better. On the contrary, it’s going to scare and depress him further. Instead love him with happy hugs, pointing out the beauty of being alive, enjoying the sunny day, brisk breeze, or whatever. When it’s over, you can mourn till you can’t mourn anymore.”