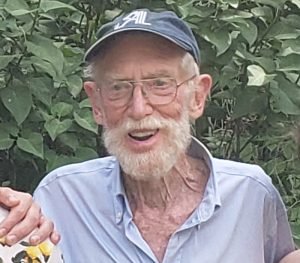 Long before he set foot on Martha’s Vineyard, Tony was intimately familiar with the surrounding waters. Having served for two years as navigator on the Spar, a Coast Guard buoy tender based in Bristol, R.I., he knew the exact locations of the buoys from Block Island to the Cape Cod Canal to Nantucket Outer Shoal, and he fell in love with the region and its weather, both fair and foul. Some 20 years later, he was introduced to the Vineyard’s shoreside by his wife, Nora Nevin, who had vacationed here since her childhood, and he fell in love all over again. Together they bought a parcel in West Tisbury and built a simple summer house, and when they retired from academic life in 1995, the Vineyard became their year-round home.

Tony continued his acquaintance with Vineyard waters in his 35-foot wooden ketch Anoa. To his chagrin, that acquaintance included an encounter with Shipyard Rock off West Chop, before it had been marked and renamed. Over the years, he extended his knowledge of New England waters to the Maine coast, and on to Nova Scotia in a single-handed voyage. His longest and most memorable voyage was with the late Jamie Weisman of Vineyard Haven and his (now) wife Laura, helping to bring the schooner Perception from New Zealand to Panama. Recently, he downsized to a 27-foot fiberglass sloop for day sailing and occasional overnights, but he retained his passion for navigating Vineyard waters under sail until his death.

On shore, Tony served on the boards of several island nonprofits and the Land Bank Commission. Together with Tucker Hubbell, Tony and Nora founded Good House Associates, Inc., and built four affordable homes between 2002 and 2005. Later, he worked with the West Tisbury Community Preservation Committee to support a variety of projects, including affordable housing.

After serving in the buoy tender Spar, he went on to serve as commanding officer of a 95-foot patrol boat in Chesapeake Bay and of an isolated loran station at Cape Atholl, Greenland. During his time in Greenland, miscellaneous readings led him to develop an interest in experimental psychology. After completing graduate studies at Columbia University, Tony held faculty positions at Swarthmore College, Columbia University, and the University of New Hampshire. In his research, he developed the concept of behavioral momentum — the tendency for ongoing, repeated action to persist in the face of disruptions or challenges — and showed that persistence depends on rewards for that action, in much the same way as the persistence of the motion of a physical object depends on its inertial mass. In 1983, he demonstrated that Newton’s second law can provide a quantitative account of the persistence of pigeons’ pecking at lighted keys for food rewards. Subsequently, other researchers have shown that the behavior of goldfish, humans, and rats follows the same principles, with various rewards including alcohol and cocaine. With colleagues in New Zealand and Utah, Tony went on to show that the quantitative principles of behavioral momentum could be extended to explain cognitive activities such as attention and short-term memory.

Beginning in 2011, he and colleagues at several universities applied the principles of behavioral momentum to the treatment of problem behavior such as aggression or self-injury in children with autism or other developmental disabilities. The goal of the project, supported by a five-year research grant from the National Institute for Child Health and Human Development, is to make the beneficial effects of treatment persist as long as possible — ideally, for life — after therapy ends. Arguably, this postretirement persistence of Tony’s research exemplifies his own work on the momentum of generously rewarded behavior.

In his scholarly writing, Tony also tried to address issues of war, peace, and human wellbeing from the perspective of his behavioral research. One article demonstrated that the principles of behavioral momentum could be used to explain the tendency for nations to initiate wars during the years from 1495 to 1995; another used related ideas to analyze the persistence of terror campaigns before 9/11. He also considered the persistence of fossil fuel consumption as a consequence of the richly rewarded economic behavior of corporations and nations, and suggested that a sustainable future for humankind could best be achieved by relatively small-scale local action.

Tony was born in Manhattan in 1933. His parents, Walter S. Nevin and Emy H. Nevin, moved to Port Washington, Long Island, where he learned to sail at the age of 10. He attended Choate School and Yale University, class of 1954, where he majored in mechanical engineering with emphasis on naval architecture and marine engineering. After his Coast Guard tour, he married Jane Hanne, with whom he had five children. The marriage ended in divorce, and he and Nora were married in 1977. He is survived by the children from his first marriage: Martha Cyr of Charlton; Sara Nevin of Oakland, Calif.; Scott Nevin of Greer, S.C.; Barbara Nevin of Philadelphia, Pa.; and Mark Nevin of Belchertown; two stepsons, Nicholas and Hardy Ophuls; four grandchildren; and three step-grandchildren.

He has asked that some of his ashes be scattered in Vineyard Sound near Lighted Bell Buoy No. 2, off West Chop, on an ebbing tide.