The Local Wild Food Challenge returned to Martha’s Vineyard on Sunday, Oct. 21, for another creative cookoff at the FARM Institute in Katama.

Despite the blustery day, the beer from Peak Brewing and Wash Ashore Beer kept spirits flowing, and outside-the-box, nature-inspired dishes were full of fresh ingredients from all over the Island.

Some great musical sets from Johnny Hoy and Second Hand filled the main tent with dancing and warmth.

The event included an open area where the Miller’s Wife Food Truck served hot, made-to-order crepes made from fresh-milled heirloom grains. Directly adjacent to the truck was Matthew Hayden, serving up samples of everything from smoked bluefish, smoked ham, and pulled bacon to various fruits, vegetables, and even some protein-rich live grasshoppers for the more daring. Hayden used a traditional method of hanging meats above an open fire to cook them. Hayden’s submission for the competition was venison-stuffed squirrel, and last year he won the wildest ingredient award for his barbecue raccoon with sweet potatoes and wild chicken of the woods mushrooms, also cooked over an open fire.

Albert Lattanzi also had a table set up, where he cooked wild boar and Italian sausage chili with white beans and fennel, as well as a dish of alligator, snapping turtle, and crawfish with onion, pepper, and tomato risotto. Last year, Lattanzi won the “Best from the Land” award for his wild Island porcini and hedgehog mushroom risotto with local sheep cheese and shaved truffle.

In the cook tent, the heat from the grills made for a nice spot to watch some culinary masterminds at work. Chef John Thurgood was busy crafting his own “Tasting a Vineyard Estuary.” His creation consisted of many foraged ingredients. like chamomile oil, sea heather, freshly caught eel, watercress, baby green crab, dandelion greens, and sea asparagus. The theory behind the dish was to “taste the life of a Vineyard eel in the back of Menemsha Pond,” as it read on the dish description card.

Thurgood said he spent a lot of time getting the ingredients for the dish, but it was time well spent. “It’s what we enjoy doing, and if you like doing it, who cares if you work 100 hours in a week? If you focus on the positive part, that’s all that matters,” he said.

Meanwhile, Thurgood’s sister, Sarah, was putting together her own wild dish, which she called “Forager’s Pasta.” The dish was mixed with kelp, Mermaid wheat flour, fresh eggs from her chickens, and chicken of the woods mushrooms plucked straight from Chilmark trees. Sarah said she wanted to showcase the unique bounty on Martha’s Vineyard without the use of animal proteins. “I hope you enjoy this dish as much as I enjoyed foraging it,” the description card read. Sarah said her creation is a labor of love. “This is what I am passionate about, and I hope other people will see the dish and take some of that inspiration with them,” she said.

Owner and creator of the Wild Food Challenge Bill Manson said it was slow setting up, but people are already getting fired up about their dishes. “We have so much talent this year. Many here have competed already, but there are some that are new to the event,” Manson said. “This is a community-centered event, and it’s really a great way to bring people together.”

Manson explained how the challenge encourages people to become more actively involved in their community and delve deeper into the natural environment. “There are so many varieties of wild ingredients here on Martha’s Vineyard. People tend to go right to the hunting and fishing aspect of things, but so much of it is foraging and even bartering,” he said. Manson said learning about your surroundings makes you more conscious and connected to the world: “It’s something inside you that you don’t often see, but here, all the creativity and freedom just bubbles to the surface.”

For Manson, the competition is rooted in sustainable practices and creating a better world for the future. “Obviously it is great to have all this wonderful food, but a lot of it is forward-thinking. It’s about our children and our grandchildren, and the type of world they will be growing up in,” he said.

There was a vast array of food samplers from local food enthusiasts, like freshly pasteurized cheese from Melinda Rabbitt of the Edgartown School Garden Dreams program. She heated organic milk at 185° until it solidified into a soft and creamy texture. She served it with gluten-free crackers. Freshly shucked oysters from Sweet Neck Farm were steamy with melted butter dropped right in the shell. Visitors slurped the salty delights to their heart’s content. Other samples included venison backstrap and venison-stuffed squirrel.

Island Grown Initiative had a large poster outlining its food conservation and waste-reduction efforts. Nevette Previd, founder of Farm. Field. Sea., stood at the table and handed out lists of different wild foods that can be found by anyone willing to venture into the wilderness. “This contest really challenges people to look at the world around them,” Previd said. “We are spoiled. We get to go right to the grocery store and pick out whatever food we want.”

For Previd, wild food is a way of taking a different approach to sustainability and responsible use of resources. “What if all the sudden, people started eating skunk just like they would chicken or beef? Our skunk problem on-Island would disappear,” she said. “It’s concepts like this that force you to change your way of thinking. There is such a rich bounty on-Island that most don’t even realize.”

To get a better understanding of the process our food goes through before it arrives at the frozen-food aisle of Stop & Shop, local hunters strung up a freshly gutted deer and demonstrated how to skin an animal from head to toe.

Whatever your flavor, the Local Wild Food Challenge had something for everyone. 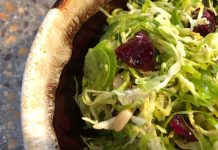