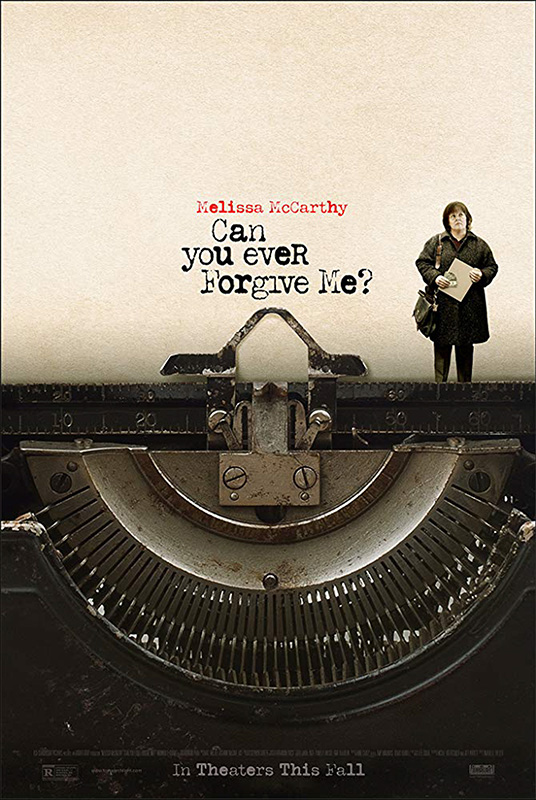 Opening this weekend at the M.V. Film Center is “Can You Ever Forgive Me?” Despite the film’s cumbersome title, this terrific forgery story stars Melissa McCarthy, an Oscar nominee for her role in “Bridesmaids,” in a standout performance. She plays a real-life author, Lee Israel, in a movie based on Israel’s 2008 memoir. As Israel, McCarthy fakes letters by famous authors like Dorothy Parker, who provides the movie’s title from one of her missives. Marielle Heller, best known for her awardwinning 2015 film “Diary of a Teenage Girl,” directs.

Israel has been a successful biographer of Estée Lauder, Dorothy Kilgallen, and Tallulah Bankhead, even landing on the N.Y. Times bestseller list. But in 1991, her career is on the skids. She gets fired as a copywriter at the New Yorker for drinking and swearing on the job. Her next writing project, a biography of comedian and actor Fanny Brice, gets no traction from her agent Marjorie, played by Jane Curtin. Crashing a party at Marjorie’s posh apartment, Israel is disgusted by Tom Clancy (Kevin Carolan), who’s regaling partygoers by trashing writers who claim writer’s block. The viewers get a firsthand look at Israel’s less-than-charming personality as she drinks double scotches and grabs cocktail shrimp to take home and share with her cat. On the way out, she cons the coat checker into giving her someone else’s coat.

Israel launches her forgery career when she discovers two genuine Brice letters in the research materials she’s perusing at the library. She makes a few hundred dollars by selling them to a book dealer, Anna (Dolly Wells), who peddles famous author’s letters. The next step is to fabricate missives by other authors, including Parker, Lillian Hellman, and Noël Coward. It turns into a booming business, and Israel invests in vintage typewriters and bakes the paper she types on to help make her bogus letters look authentic. She argues she’s better at writing Parker letters than Parker.

A full-blown misanthrope, Israel claims her cat Jersey is her only friend. Then she renews a hit-or-miss friendship with Jack Hock (Richard E. Grant), who makes a living as a cocaine dealer and doesn’t seem to have any particular home address. He ends up on Israel’s couch, eventually getting kicked out for carousing there with a new boyfriend while Israel is at Yale digging up forging materials. Jack also helps her sell her forged letters when booksellers start to get suspicious of her. Another sort-of friendship blossoms with Anna, who not only buys Israel’s forged letters but is also a fan of her real work. But Israel pushes away this admirer. She is a lonely soul, illustrated by the conversation she has about her cat with her ex-lover Elaine (Anna Deavere Smith). Eventually her forgery career spins out of control and runs into legal trouble.

“Can You Ever Forgive Me?” pays tribute to New York in the days when it was still filled with bookstores. Well before cell phones and laptops took over, the world was more literary then. Best known for her comic roles, McCarthy makes Israel a perversely appealing and often funny character. In her hands, this curmudgeonly woman is endearing.

Information and tickets for “Can You Ever Forgive Me?” and other Film Center and Capawock films are available at mvfilmsociety.com.