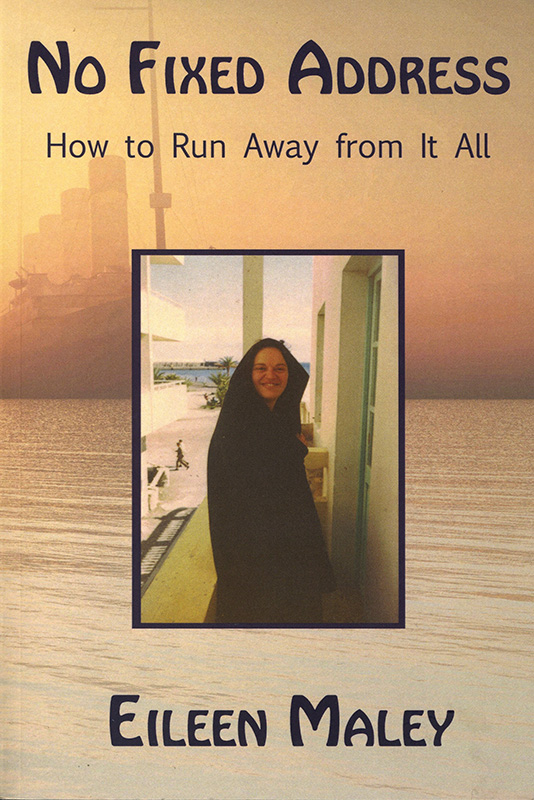 That’s how Tim Maley, husband of author Eileen Maley, described the moment the two first laid eyes on each other.

They were aboard the SS Iberia in 1971, a vessel making its way from Vancouver to Sydney. The trip would take about three weeks. It was early December, and Eileen, 32 at the time, decided it was time for a change. She quit her job writing a daily column reviewing television shows for the Vancouver Sun. She described the job as one of the sweetest in journalism — she could sleep in, work her own hours, and watch plenty of TV. After her cozy job became “too cozy,” and a divorce from her first marriage was finalized, Eileen was ready to break routine.

She knew she wanted to go someplace far away. Somewhere she could communicate and work — where people still spoke English. Not the U.S. — immigration policies were too rigid. Not England — “too damp and smelly and rude.” She wanted to be someplace warm and sunny with no reason to hurry home. Australia would do.

The plan was to be there for a few months — work, maybe visit her friend in Hong Kong afterward. But on the way there, she met Tim. Eileen’s couple of months away turned into a couple of years. She traveled the world with a man she’d end up spending the rest of her life with.

“We liked each other,” she said 44 years later, sitting on her living room couch in West Tisbury. “We wanted to hang out together,” she laughed, “and we still are.”

She wrote a 300-page memoir about their journey, “No Fixed Address: How to Run Away from It All.” It’s broken up into chapters, each one reflecting one leg of the two-and-a-half-year journey, as well as the years finding her way home to West Tisbury. She and Tim traveled from Sydney to East Timor, to Bali, Java, Malaysia, Thailand, Hong Kong, Burma, Nepal, India, Tanzania, Kenya, Egypt, Syria, Greece, and Spain, to name a few stops. Tim was a summer kid on Martha’s Vineyard, which brought the couple to West Tisbury when it was time to come home. They were year-rounders by 1974, and married by ’76. The U.S. became Eileen’s official home.

Vivid, engaging details bring Eileen’s readers into her years on the road. I wondered how she was able to tap into this memory vault over 40 years later.

“It’s a lot easier to remember stuff from long ago than it is to remember what we had for dinner last night,” she said. “Part of that is age, of course. When everything is deeply embedded, it’s more available.”

Eileen continued writing while traveling, and submitted articles about her experiences to various newspapers. Through that, she had an archive of published work to sort through when it came time to write her story.

“When I reached a point where I didn’t have any work projects I had to do, I thought, Maybe I’ll try to write a book,” Eileen said.

She joined Cynthia Riggs’ writing group, and each Sunday, she’d show up with a new chapter.

“I’d bring five to six finished pages, hand everyone a copy, and read them aloud,” she said. “People would offer positive comments, usually redirecting narrative and recommending elaborations, clarifications, and advice to fill out areas with more of my own feelings.”

She’d write in her study in the home she and Tim bought together in 1975. The couple lives around the corner from the Field Gallery, the artist co-op Tim’s father Thomas established in 1970. There’s a chapter in the book dedicated to the Field Gallery, as well as a chapter about being landlords, quitting smoking, getting married, and their lives today. Eileen writes simply with intimate detail that relates to all the senses. She lets her readers in — I felt like I knew her and Tim before I even met them.

Looking back at everyplace they’ve been, Eileen and Tim agreed India was most striking. “There’s so much of everything,” Eileen said. “It’s such an extreme place. Extreme beauty as well as extreme poverty.”

I asked if there’s any single place they’d wish they’d gone. “We didn’t make it to Cyprus,” Tim said. “There was a wine fest I wanted to go to. We didn’t even know it, but there was a war going on. We were in Tel Aviv and there were no planes to Cyprus.”

They were traveling on $300 per month, which breaks down to about $10 per day. They stayed in hotels — hostels weren’t as common then as they are today. They lived out of one suitcase each, and their suitcases didn’t have wheels.

“If you travel for any length of time, especially third world, third class, there are two diseases from which you cannot escape,” Tim said. “And that is Grouchinson’s complex and Giddison’s syndrome.

“Everything’s funny — and then Grouchinson’s speaks for itself. You can’t avoid them if you spend any length of time traveling.”

Another takeaway from the trip was how important English as a second, or first, language is. English is where people from all over the world found common ground. “English is definitely the lingua franca of the world,” Tim said. “It’s just absolutely essential when traveling, which is lucky for us.”

She reflected on how places have changed over the past 40 years. Bali in the 1970s was such a remote place. It didn’t have electricity yet. Today, it’s a trendy, tracked-out tourist destination. “It’s a circus now, with all the lights and glitter,” Eileen said.

They said lots of places have lost their charm — one of the reasons they’re happy not to go back.

“I’ve never been one to go back to a place I’ve already been,” Eileen said. “Then again, I don’t really want to go anywhere anymore. The idea of getting on anything beyond the ferry is very unappealing.”

On-Island, Tim and Eileen have had a heavy hand in advocating for kids with special needs. They have one daughter, Chloe, with autism. “We’ve always been involved in programs for people with disabilities,” Eileen said. “We wanted to get that rolling here.”

Tim helped start Project Headway — a play-based preschool program that serves ages 3 to 5 with and without disabilities. The program is still active today. Eileen ran the Field Gallery for a number of years in the ’70s, and again in the 2000s. She also wrote for The Times and the Gazette, and worked at the West Tisbury town hall.

“And finally, I didn’t do any of those things,” she said. That’s when she took on the endeavour of writing a book. “The hardest part was wanting to get up and do something else every five minutes,” Eileen said of the process. “Anything to pull you away from the work. But I’d do some writing in the morning, take a break, and then go back in the evening. Whenever I felt I had the chance, I’d just do it.”

After having traveled almost everywhere, I had to ask, why Martha’s Vineyard?

“It’s the people we know,” Eileen said. “It’s such a wonderful community, and our friends are so important. I never had that before; I never seemed to stay anywhere long enough to have this sense of ‘It takes a village.’ It’s so beautiful. It’s not spoiled.”

“The pace is nice,” Tim added.

Eileen sums it up in the final line of her book: “I’m staying in place for the duration, but I wouldn’t have traded it for the world. Oh wait: It was the world.”