Of donkeys, Equus africanus asinus, there are few early records on the Vineyard. It’s not until the late 1800s that references can be found.

In an 1881 article titled “Peculiarities of Martha’s Vineyard,” the New York Herald reported, “There is an aged cripple who rides about in a diminutive cart drawn by a comical little donkey, who goes as he pleases, much to the delight of the boys and girls who fondle and spoil him. The donkey is a character and displays an amount of sagacity which is astonishing in an animal usually believed to be the most stubborn creature that goes on four legs.”

By the early 1930s, landscape architect Stanley Leaming of Chilmark kept a pair of fondly remembered donkeys at his home on Middle Road. Leaming’s donkeys, named Tex and Otoño, were featured at the fair each year, where children could get a ride for a dime.

Honey visited Leaming’s donkeys off-season in North Tisbury, too, while Leaming was away. She explained to Lee, “Ellsworth Norton had a big barn, and he took the donkeys for the winter. So we made a lot of trips up there. And we would take them out, just the two of us. We didn’t have anybody with us. We were 12, something like that. Get on those donkeys and we’d ride out of that yard and go down that road onto the main road, and we went over to her grandfather’s house. We would go over there and call on them on our donkeys. And then we would turn around and come back. And as soon as those donkeys realized we were heading the other way, they would race, and we would come thundering down those roads and cross this great meadow into the barn. And we couldn’t get off! We’d have to go right into the stalls. And our heads would hit the ceiling. And then her uncle would come down there and rescue us. So we’d roll off into his arms. We did that over and over and over again.” 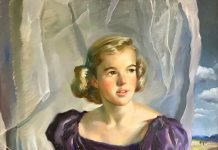 This Was Then: A story of three Vineyard men