Thanksgiving weekend is over, and predictably I am Monday-morning quarterbacking. Whom did I insult? And should I apologize? If the discussion around the dinner table gets heated, and I am hosting, should I refrain from telling a guest that I viscerally and emphatically disagree with him? Are there still parameters for polite engagement, or have we moved beyond that? Civil discourse is important, but how do you keep it civil when someone says something you deem so egregious that you’d like to stuff their face in a big bowl of stuffing — but you don’t, only because you don’t want to ruin the stuffing?

First of all, big kudos for inviting people into your home with whom you disagree. I mean that. Given the current political and culture climate, we should all be reaching across the divide and engaging with people who Think Different.

Since this person was at your Thanksgiving dinner, they are probably not a casual acquaintance, but somebody fairly dear to you. If you knew that you’d end up teetering on the edge of outrage, then a) good for you for opening your door to them anyhow, but also b) you knew what you were in for, so blame yourself, not them, for your intellectual dyspepsia.

On the other hand, if you really had no idea they were going to say something you’d find shocking, then hold yourself together by thinking about what a great anecdote this is going to make when you talk about it at work next week.

In either case, do not stuff your guest’s face into the stuffing. But that doesn’t mean you have to play the part of sycophant. You are allowed — nay, encouraged — to disagree.

A good host is genuine. They present themselves to their guests authentically. If you, as a host, believe that the Scottish Bakehouse is in Vineyard Haven, and your guest is adamant that it’s in Tisbury, you don’t have to agree with your guest. You can disagree, lecture, or even scold the tiniest bit. But you must remain rigorously polite, even if your guest becomes rude. (“Polite” is, of course, a relative term — in this case, it means “be more gracious than your guest.”)

If you find it impossible to remain polite when a guest proclaims something that outrages you, here are some options:

Bemused readers ask bestselling novelist and Shakespeare for the Masses co-creator Nicole Galland for her take on navigating the precarious social landscape that comes with living on the Vineyard. Her upcoming novel, “On the Same Page,” is set on the Island in winter, and comes out on New Year’s Eve from William Morrow. Trying to untangle a messy Island ethics or etiquette question? Send it to onIsland@mvtimes.com. 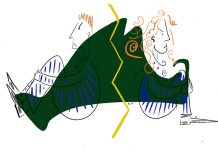 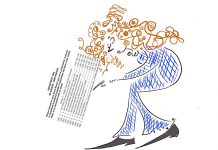 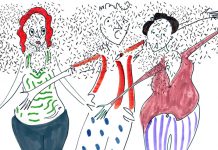