Jennifer Gardner died on the afternoon of Jan. 1 after a long and valiant fight against an inoperable brain tumor. She died at her beloved West Tisbury home in the company of family and friends. 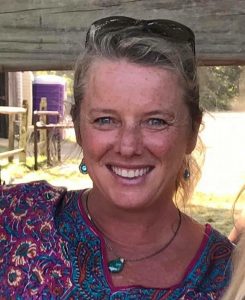 Jennifer is survived by her children, Griffin and Leila Gardner; her brother Stuart, her father Douglass and mother Leila McCarter, and their respective spouses, Josie Gardner, Connie Gardner, and John McCarter. She’s also survived by her partner Barry Stringfellow, step brother Nate Gardner, and her devoted dogs, Kaya and Luna.

Jennifer touched many lives in her 54 years. She was always ready to help people and animals in need. She was a volunteer Emergency Medical Technician for Tri-Town Ambulance for 10 years.

She was a successful entrepreneur who ran Summer Solstice in Tisbury while also raising two young children. She later segued to a successful career at Tea Lane Associates, where she cherished her co-workers and regarded them as family.

Jennifer was an outstanding athlete — an expert skier, who also excelled at tennis, cycling, and windsurfing. A true Island girl, she also was the long-time record holder of the Ag Fair skillet toss.

She loved Martha’s Vineyard and knew every inch of this Island.

Jennifer was a consummate chef who got great joy out of feeding gatherings at her large dining room table.

She was an alumnus of Berkshire School and the University of Vermont.

Jennifer never stopped fighting the unbeatable foe that took her from us far too soon. Through it all, she never lost her sense of humor. She managed to smile to the very end, and nothing made her smile more than the love and affection that her children showered on her.

A memorial service for Jennifer will be scheduled at a later date.