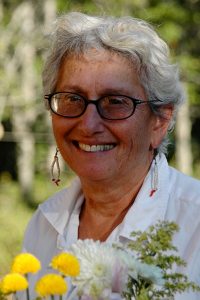 Elaine was born on March 28, 1937, in Brooklyn, N.Y. She graduated from high school at the age of 16, and earned her undergraduate degree from Brooklyn College, majoring in mathematics and minoring in physics. At Yale University, she earned an M.A. and A.B.D.(all but dissertation) in mathematics, but after spending two years on her doctoral thesis, she discovered that the solution to the mathematical problem she had been working on had already been published in an obscure mathematics journal in Poland.

By this time, 1961, she had been hired as a teacher by Goucher College, a small liberal arts college for women in Towson, Md., contingent upon finishing her thesis, for which her advisor had suggested a new, unrelated problem. She had no experience as a teacher, but the advice given to her by a friend who had done a little teaching is something she followed for the rest of her life: “On rainy days, wear bright colors.”

Finishing her thesis was not easy, however, and after two years of struggling, she was ready to give it up, even though it would mean leaving academic life, which she loved. By this time, she had met the man she would marry, who suggested that she combine her interest in math with her love of history and pursue a doctorate in the history of science at Johns Hopkins University. By contrast with her previous struggles, this experience was a breeze, and she received her Ph.D. in 1969, four years after she had begun. In later years, she earned a second master’s degree from Hopkins, this time in electrical engineering and computer science, which was awarded in 1987.

Over many years, Elaine happily played the role of field assistant for her husband Hans, a world-renowned geologist. Together, they traveled the globe, as his explorations took him from the Green River area of Wyoming to Kenya, Tanzania, Ethiopia, Bolivia, China, Sicily, and Greece.

Thinking ahead to the time when they might not want to travel so much, in 1984 they bought a Vineyard camp — an A-frame with one room upstairs and one down, with no electricity or indoor plumbing, deep in the woods down a dirt road. Over the four summers they had together on the Island, they began to improve the place, building a screened-in porch in one summer, a second A-frame the next year, and a deck to connect the two structures the year after that.

After Hans’ sudden death in 1987, Elaine was not sure whether to keep their home in Maryland, or even to stay at her job. Taking a leave of absence from Goucher, she volunteered for the Peace Corps, and was sent to teach data processing in Seychelles.

She did ultimately return to both home and job, for a time. But in 2001, 40 years after she had begun teaching, she retired from Goucher and moved to the Island, building a winter home across the field from the camp. Here, she created a rich life centered on near-constant volunteer work, participation in book clubs, the Want to Know Club, and the Peter Luce Play Readers, travel, and attendance at many cultural events, particularly those offered by the Yard, the Vineyard Playhouse, and the Martha’s Vineyard Chamber Music Society.

There will be a memorial service on March 31 at 11 am at the Martha’s Vineyard Hebrew Center, to which anyone who wishes to gather to remember Elaine is invited. (Please check the MVHC calendar to confirm timing.)

Donations in Elaine’s memory may be made to one of the many Vineyard organizations to which she devoted so much time and energy (list follows), or to the Hans Eugster Research Fund, which she established in her husband’s memory at the Johns Hopkins University, where he was a distinguished professor and department chair. Mail checks payable to the Hans Eugster Research Fund to Krieger School of Arts and Sciences Development Office, 3400 N. Charles St., Wyman Bldg. Ste. 500, Baltimore, MD 21218, Attn: Nancy Gregoire, or visit krieger.jhu.edu/giving, select “give now,” on the donation form designate your gift to “other,” and type in “Hans Eugster Research Fund.”)

Vineyard causes and organizations dear to Elaine’s heart, many of which will miss her selfless contributions on their boards or as volunteer and patron, included the Martha’s Vineyard Cancer Support Group, Hospice of Martha’s Vineyard, Friends of the Vineyard Haven Library, the Committee on Hunger, Martha’s Vineyard Chamber Music Society, Polly Hill Arboretum, Vineyard Playhouse, and the Yard.

Take action to bring about change