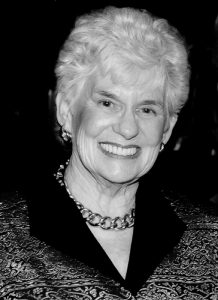 Eileen was a happy soul, sharing life’s adventures with family and friends around the world. Her motto was, “Good morning, life and all things beautiful.”

Eileen was a force of nature. She impressed everyone she encountered with her enthusiasm for lifelong learning, intellectual growth, reading, the arts, weekly tennis, bridge games, and paddle tennis, and she was always keen to debate no matter the subject. Along with family, music was a pillar in her life. Eileen had a great voice, and loved to write her own songs, having a whimsical way with words. Her poems written just for you were highly treasured, as was her published poetry.

Eileen was a world traveler throughout her life, exploring numerous countries across six continents. She confidently led her family as they built their lives abroad, instilling the importance of independent thought, self-reliance, and acceptance. In 1959, they moved to Caracas, Venezuela, where Eileen mastered the language and culture. After a brief time in the U.S., they moved to Brussels, Belgium, where Eileen became proficient in French, her third language. They returned to the U.S. in 1967. Following years of cheering on her children in the classroom and on the fields of sport, Eileen and Phil relocated to London, England, in 1988.

Upon their return to the U.S. in 1996, Eileen was actively involved in her community into her 80s, volunteering for the Women’s Association for Morristown Medical Center, the Carol G. Simon Cancer Center (Music in the Atrium), the Morristown Library, and Mrs. Wilson’s Halfway House in Morristown, N.J. In the summers, Eileen returned to her New England roots and became a resident and loving member of the Martha’s Vineyard community. She spent over 35 years as a volunteer and contributor to the Martha’s Vineyard Hospital Foundation, and was also instrumental in the development of the Farm Neck Golf Club mission, especially the tennis vision.

Eileen was predeceased by her husband, her eldest daughter Kathleen B. Smith, her eldest son P.J. Brown, and her two sisters, Christine Breen and Maureen Dourney. She is survived by her son, Barrett Brown and his wife Jeannie, daughters Suzanne Brown van Dijk and her husband Alex, Lisa Brown Langley and her husband Brendan, and Victoria Brown Van Keer and her husband Steven, her daughter-in-law Beck Brown, her sister Alice Cole, and sister-in-law Nan Beckman. Eileen was also a proud and caring grandmother of 11 grandchildren, Stephanie Silversmith, Timothy Smith, Eoin, Gareth and Kelsey Brown, Michaela Brown, Ryan, Christopher, and Caroline van Dijk, and Charlotte and Lauranne Van Keer, and 10 nieces and nephews. Eileen and the Brown family will be forever grateful to her caregivers.

A celebration of Eileen’s life will be held in March 2019. In lieu of flowers, donations may be made in made in memory of Eileen O. Brown to the Foundation for Morristown Medical Center, 475 South St., first floor, Morristown, NJ 07960. Donations may also be made online at f4mmc.org.