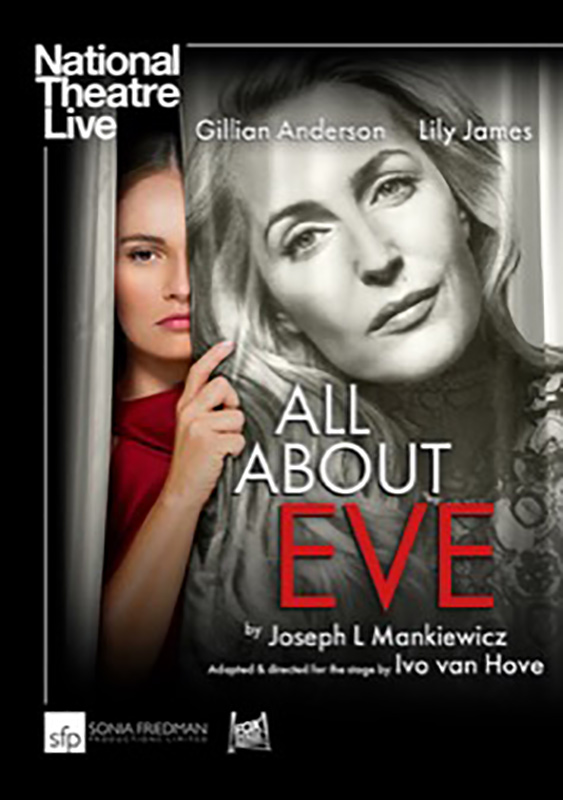 Two special events are coming to the Martha’s Vineyard Film Center next week. “All About Eve,” a filmed production by London’s National Theatre Live, plays Friday, April 12, at 7:30 pm. “Klimt & Schiele: Eros and Psyche,” the third in the Film Center’s Great Art on Screen series, is scheduled for Wednesday, April 17, at 7:30 pm.

Gillian Anderson, who starred in “X-Files,” plays Margo Channing, the aging actress in “All About Eve.” Lily James, who played Lady Rose MacClare in “Downton Abbey” and Donna in “Mamma Mia! Here We Go Again,” takes on the role of Channing’s nemesis, Eve Harrington.

Ivo van Hove, whose “Network” is playing on Broadway, directed the filmed stage production of “All About Eve.” It is based on Joseph L. Mankiewicz’s 1950 film of the same name, which won six Oscars. Bette Davis played Channing in the original film version, with Anne Baxter as Eve. The film is famous for its satire of the relationship between the ingenue who inveigles herself into the life of Channing, a Broadway star whose career is fading. Celebrity, youth, and identity are the themes.

Eve starts out as one of Channing’s biggest fans. She quickly takes advantage of the diva’s mentorship. Channing has an ego as big as a house and a penchant for alcohol. Her most famous line is, “Fasten your seatbelts, it’s going to be a bumpy ride.”

Austrian painter Gustav Klimt, who worked from the late 19th century to the end of World War I, remains one of the world’s foremost artists. His portrait “Adele Bloch-Bauer” sold for $150 million in 2016. Known as a symbolist, Klimt attended the University of Applied Arts Vienna. He was a founder and the president of the Vienna Secession, a movement designed to bring young foreign artists to Vienna, a leading cultural capital and center of modernism at the time.

Klimt’s portraits of women introduced a new sensuality and eroticism, spotlighting their increased prominence and power. Three of his paintings for the University of Vienna, however, were attacked as pornographic. His Golden Period was so named because he used gold leaf on his work, which emphasized decorative elements.

Egon Schiele was Klimt’s protégé and, like Klimt, became known for the raw sexuality of his work. Painting writhing, naked bodies, and self-portraits, he is considered an early expressionist. After three years at Vienna’s Academy of Fine Arts, he founded the New Art Group for disaffected artists. Klimt and Schiele died from complications of the Spanish flu, the 1918 pandemic.

“Klimt & Schiele” employs commentary with work from Nobel prizewinner Eric Kandel, art historians Alfred Weidinger and Jane Kallir, musicologist Bryan Gilliam, and pianist Rudolf Buchbinder. The documentary celebrates the 100th anniversary of Klimt’s and Schiele’s deaths in 1918. Both are considered pioneers of modernism. Included in the film are works from the Leopold, Belvedere, Albertina and Kunsthistorisches museums — all in Vienna.

For Information and tickets for these special events and other screenings at the Film Center, visit mvfilmsociety.com.