It is with a heavy heart that we announce the passing of Angela K. Waldron, 72, of Aquinnah, on April 13, 2019. At the time of her death she was comforted by her loving daughter, Wenonah (“Nonie,”) and longtime friend Rosie Roberts. Nonie and Rosie kept a constant vigil at Angie’s bedside at Martha’s Vineyard Hospital during the last week of her life. 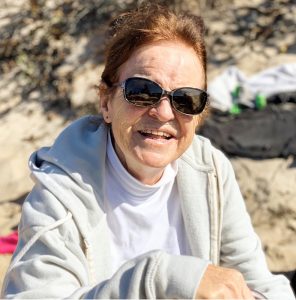 Angie was the youngest of three children, born on Feb. 1, 1947, at the Martha’s Vineyard Hospital to Thomas B. Waldron and Eleanor (Schultz) Waldron. She grew up in West Tisbury across from Alley’s General Store. Angie attended the West Tisbury Elementary School, the Tisbury School, and graduated from the Martha’s Vineyard Regional High School in 1964. She then went on to Franklin Pierce College. She was happy to stay in touch with her college friends over all these years.

Angie, like her mother, was an avid reader. Her readings gave her a worldly vision, but she was a West Tisbury girl through and through. Her soul never strayed far from the town she loved. Angie loved the Agricultural Fair. She spent each day of every year at the fair. She loved to enter one of her many animals and flowers in hopes of winning a blue ribbon. She shared that love with her grandchildren, and urged them to enter their art, flowers, and pets. Her early years were spent working the family farm with her siblings, swinging from the rafters at Whiting’s barn with her friends, and riding horses. Throughout her life she enjoyed visiting her ancestral family lands at Deep Bottom Cove on Tisbury Great Pond. Angie, along with her parents and siblings, Joan and Dickie, spent many happy summers in their small family camp during her youth.

Angie had a deep love for animals. For many years she rode horses at Pond View Farm, under the watchful eye of Marjorie Manter. Marjorie treated the girls like family, and often had them over for Sunday dinner with her parents, Dan’l and Lillian. As soon as Nonie was old enough to ride, she put her on a horse and took great pride in passing along her passion. Angie rode into her wedding to Jeffrey Madison on horseback in 1973.

Angie lived a life of community service. After many years waitressing, she began work at Martha’s Vineyard Community Services under the guidance of the late Dr. Milton Mazer. She also served the town of Aquinnah for many years as the town treasurer, and enjoyed the casual camaraderie with taxpayers from that community during her tenure. She later worked for the Wampanoag Tribe of Gay Head (Aquinnah) as the community outreach coordinator for 25 years. During that time she coordinated services to many tribal families. She was also a certified substance abuse counselor. In her retirement, Angie became the animal control officer for the town of Aquinnah, and worked at the Aquinnah Public Library.

Angela Waldron is survived by her only child, Wenonah Madison-Sauer; her son-in-law, Daniel Sauer; four grandchildren, Waylon, Amos, Jaleah, and Luz; her sister, Joan Jenkinson and her husband, Walter (“Pat”); her niece, Holly Bario and her children; her nephew, Patrick Jenkinson and his son; and former husband Jeffrey Madison. She was predeceased by her father, Thomas B. Waldron, her mother, Eleanor (Shultz) Waldron, and a brother, Richard.

A graveside service will be held in West Tisbury Cemetery, State Road, West Tisbury, on Friday, April 26, at 1:30 pm, followed by a reception at the M.V. Agricultural Hall.