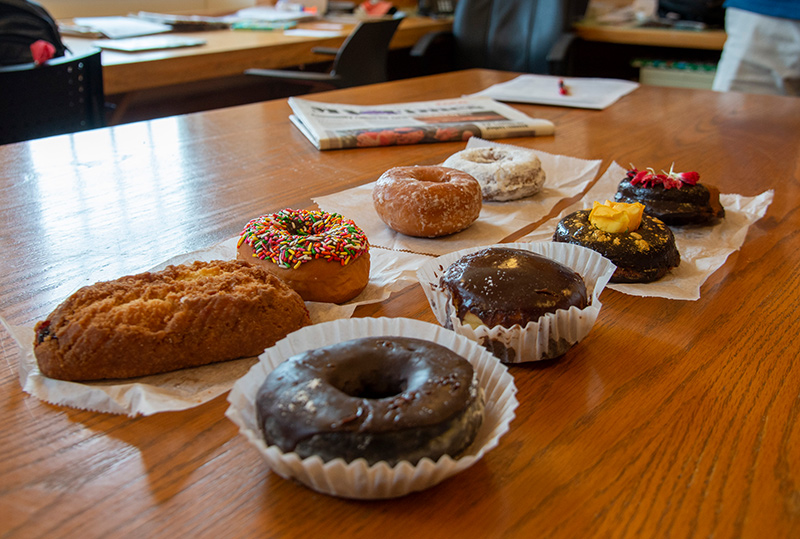 The MV Times newsroom was put to the test this National Doughnut Day, June 7, when stomachs and taste buds pushed to the limit as we attempted to find the best doughnut the Island offers. As Carol Ward in ad sales support put it, “Doughnuts, in general, are all that.”

As a commuter, my National Doughnut Day began with a free doughnut from Cumberland Farms, gifted to me by my mom after she grabbed her morning coffee and received it for free. When we got to the Times’ office and mentioned National Doughnut Day to the rest of the staff, it seemed only fair that while the intern (yes, that’s me), passed through various Island towns on an assignment, that doughnuts be returned to the hungry back at the office.

Making stops for a variety of doughnuts at Dip 02539, MV Gourmet Cafe & Bakery (better known at night as Back Door Donuts), and Juice by the Sea, for the health-conscious folks in the office, we dove in for a nice office “lunch.” Here’s what everyone had to say about what they tried.

Editor George Brennan is a big fan of the sweet treats. “Today, I’ve eaten too many, and feel like I need a long walk,” he said. “It started with the freebie with my 99 cent coffee at Cumberland Farms this morning, then I got a Black Dog Boston creme gifted to me, and then we had the bright idea to get doughnuts from a collection of other places across the Island to try.”

On his favorite, Brennan had this to say, “I have to say my favorite was the jelly cruller from Dippin’ Donuts. Nice crunchy outer layer and a sweet-tasting jelly inside,” he continued, “but fear not, Back Door. I’ll be back in line a few times this season for your delicious glazed doughnuts fresh from the hot oil.”

Reporter Rich Saltzberg is never one to pass up a freebie at the office conference table. “Back Door Donuts chocolate on chocolate was superlative,” he said. “That’s a doughnut that they’ll put the paddles on your chest for.”

The doughnuts from Juice by the Sea were first to go, and while Satlzberg described them as “un-doughnutlike, and a little bit leaden in texture and wooden in flavor.” Others in the office marveled at their designer nature — they came sprinkled with gold paint, and with edible flowers. Reporter Lucas Thors described them as blondie-esque, heavier than your typical doughnut, but not worse for it.

To intern Amanda Cronin, Juice by the Sea’s creation “tasted more like a cookie than a doughnut.” “The pink flower garnish was almost too pretty to eat,” she said, “so I’m not complaining.”

“I’m loyal to the glazed doughnut, and Dippin’s didn’t disappoint,” reporter Brittany Bowker said. The glazed from what is now called Dip 02539, formerly Dippin’ Donuts, was one of the first doughnuts to go.

Reporter Brian Dowd probably summed it up best with his take on the chocolate, chocolate frosted doughnut from Back Door, “Champion. Excelsior. VIP. Sexy. Mysterious. Antidisestablishmentarianism — all words that come to mind after taking a bite of that doughnut.”

After a day of decadent smells and sweet treats, I don’t think anyone in the office is close to picking a favorite, or naming the Island’s best doughnut — in reality, there may not be a bad doughnut on this Island.