After moving to Chilmark seven years ago, I began to notice the intricacies of the bentwood natural fencing that lines the right side of the path leading to Lucy Vincent Beach. All the hand-tied vines, the small sacred spaces, the beauty of this natural fence — I wondered who was behind it. In February, I brought my car to Mid-Island Auto to get it inspected. When I went inside to pay, I noticed a collection of small quirky driftwood and found art, and inquired about the pieces. I learned that the driftwood art and tamed vine fencing were made by the same outside artist — Martina Mastromonaco.

I’m a Chilmark resident, so I was more familiar with Martina as the superintendent of the town of Chilmark beach department. I wrote her, and was delighted to visit her in the West Tisbury home she and her husband built in 1982.

Martina grew up an only child in an apartment in Mamaroneck, Long Island. From the top floor she could look out and over the Long Island Sound and Mamaroneck River, where she used to “swim with the rats,” Martina said. She was bullied at school because her mother was obese and her stepfather was African American. She said she always felt like an outsider.

“My mom was a real hippie,” Martina told me. “They even took me to Woodstock.” After two years at the State University of New York, Martina, who had come to the Island as a kid, decided to stay for a summer. She fell in love with the Island, met her husband, and had her first child in 1983. Martina and her husband now have two kids, a son-in-law, and a grandchild on the Island.

Though Martina doesn’t remember when she began collecting, she thinks it started when she left her job with the U.S. Ambulance Corps.

“I always loved wood,” Martina said. “[I started] that fence at Lucy Vincent Beach at least 10 or 15 years ago. It had a purpose, to keep the foot traffic in the middle [of the path] and keep the prickers back.” Martina has always been drawn to driftwood and treasure hunting at yard sales. She began volunteering at the Dumptique. “I started having a theme, using old jewelry, nonworking watches, crosses, little animals, and a lot of stuff collected from the Dumptique,” Martina said. The driftwood works are an amalgam of small objects glued on and then coated in a clear glossy finish. They hang on the walls or adorn tops of shelves and tables.

Outside, Martina has a huge yard with fencing along the back decorated with flags, “mostly collected from the Dumptique,” she said. The flags help create more privacy from the bike path behind her home. There are many pieces and assembled works throughout the yard. “You can’t get too attached [to anything outside], because you never know what it’s going to do,” Martina said. She pointed to a “faerie house” she and her granddaughter finished. “I love lights, color, sound, and want to use all of them,” Martina said. There are homemade chimes, found chimes, and other pieces dangling from the trees.

“I have a hard time letting go. Sometimes I find a doll no one else wants, and I have to find a purpose for it,” Martina said. “I have a lot of learning disabilities, and see my art as a strength.”

She paints any surface — walls, rocks, furniture, canvases, and drawer pulls. Her art is displayed on walls, sits atop shelves, and is nestled in nooks throughout her home. Martina also dabbles in photography, and creates printed beach photobooks every year.

Art has never been a conscious decision for Martina. It is for sharing, not selling, she told me.

Martina has overcome a number of medical issues, but always radiates a positive spirit. “Be flexible. Be open-minded. Don’t be critical,” she said. “Look for the good in every day.”

And make art when the spirit moves you. 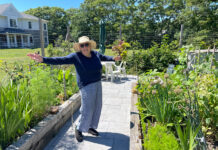 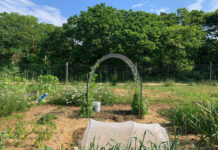 ‘A labor of love’ 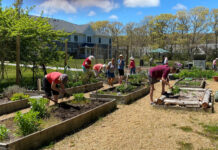