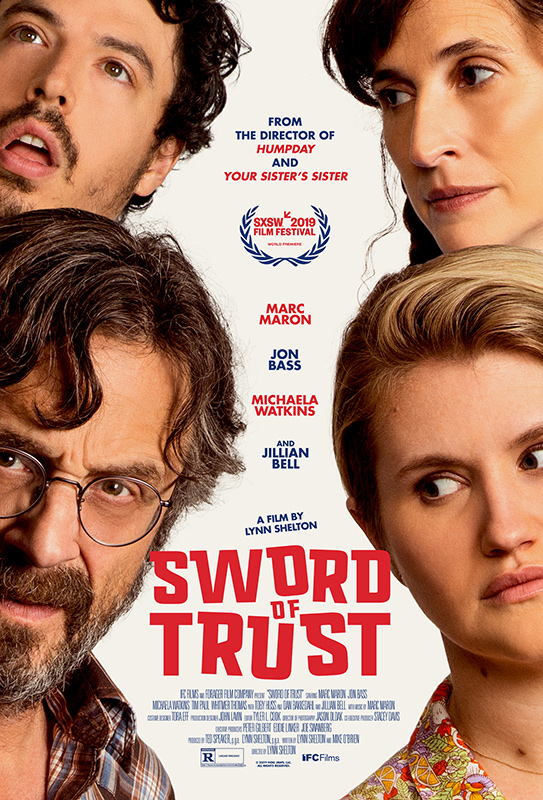 “Sword of Trust,” a goofy satire, opens at the Capawock on Friday, August 23. Viewers may recognize director Lynne Shelton for her mumblecore film, “Your Sister’s Sisters,” as well as, more recently, TV’s “Glow” and “The Mindy Project.” Mumblecore refers to the indie subgenre that relies heavily on dialogue and nonprofessional actors. Shelton co-wrote the script for “Sword of Trust” with “Saturday Night Live” vet Mike O’Brien.

Set in Birmingham, Ala., “Sword of Trust” follows the misadventures of Cindy (Jillian Bell) and her partner Mary (Michaela Watkins). The two visit the house Cindy expects to inherit from her deceased grandfather, but instead all she gets is an antique Civil War sword, supposedly used to help her Confederate great-great grandfather claim victory for the South.

The story wanders over to jaded pawn shop owner Mel, played by standup comedian and podcaster Marc Maron. Mel demonstrates his expertise at wrangling items out of customers, and his ex, Deirdre, played by Shelton, tries unsuccessfully to wheedle a loan out of him.

Cindy and Mary visit Mel’s shop, hoping to pawn the inherited sword. He’s pretty skeptical of the story they spin about the sword’s history, but Mel’s young assistant Nathaniel, an Internet conspiracy fanatic, shows Mel a site offering $40,000 for “power items” that prove the South won the war. The four team up to try and collect the dough. Hog Jaw (Toby Huss), a white supremacist, shows up in response to their query, and takes them in a carpet-padded van to meet his boss — not before two other equally hostile rednecks try to wrestle the sword from the four.

The ride to Tennessee in the padded van gives Cynthia and Mary time to background their life together, and Mel to provide a rundown on his life before the pawn shop. They’re poignant riffs among the many that make “Sword of Trust” an enjoyably nutty ride. Later Cynthia listens to Nathaniel explain why the earth is really flat, and it turns out Mary served in the Israeli army.

Like Hitchcock’s McGuffins, the Civil War sword is a good excuse to keep the plot going. And “Sword of Trust” offers a biting commentary on what’s wrong with America right now.

Opening Friday, August 23, at the Strand is “The Peanut Butter Falcon.” Directed byTyler Nilson and Michael Schwartz, it’s a heartwarming tale about Zak, a young Down syndrome man who’s been warehoused in an old age home. Zak is played by Zack Gottsagen, a remarkable real-life Down syndrome man with acting experience. Zak’s dream in the film is to become a pro wrestler like the Saltwater Redneck, whose video he watches obsessively.

The first order of business, though, is to escape from the home he’s in. His roommate Carl (Bruce Dern) helps him escape, and he ends up hiding under a canvas in a boat that belongs to Tyler (Shia LeBeouf). Down-and-out Tyler has been stealing crabs from other fishermen’s traps. Eleanor (Dakota Johnson), a volunteer in the home where Zak has been housed, sets out in search of him. Zak wants to go to the wrestling school his hero runs in Aden, N.C.

Hiding from the crabbers he’s been stealing from, Tyler burns their traps, and they set out for revenge. Tyler at first wants nothing to do with Zak. He’s still grieving over the loss of his brother, whose death he thinks he’s caused. Over time that changes, and the two begin to bond. First it’s a secret handshake, then a shared jug of whiskey. A blind preacher, Jasper, baptizes Zak and donates the wood they need to make a raft.

“The Peanut Butter Falcon,” a combination buddy and road movie, captures the beauty of North Carolina’s Outer Banks, and is well acted and a pleasure to watch.

Information and tickets for “Sword of Trust” at the Capawock and “The Peanut Butter Falcon” at the Strand are available at mvfilmsociety.com. Information about films playing at Edgartown’s Entertainment Cinemas is available at entertainmentcinemas.com/locations/edgartown/.