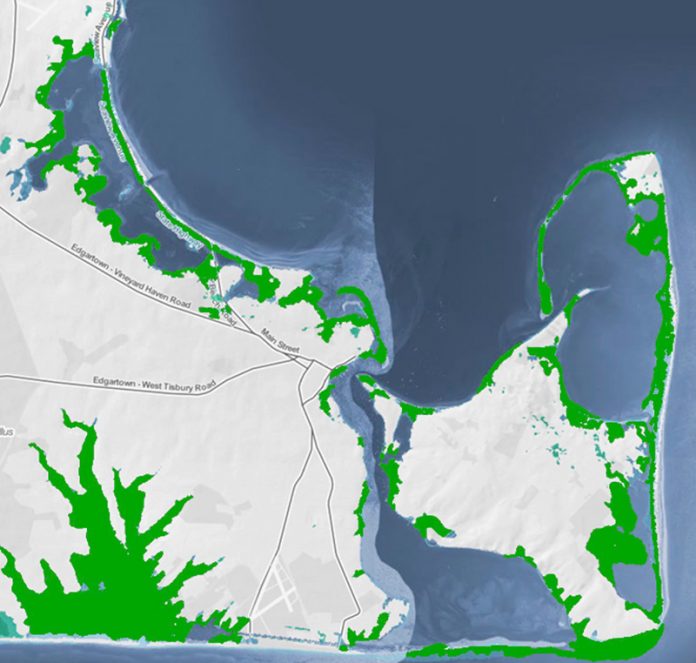 The map shows ocean flooding along Chappaquiddick’s coast in green color, given a 5-foot sea level rise, 65 to 100 years from now.

Based on NOAA’s projections, Norton Point, Wasque, and East Beach will become sandbars, as will the acreage from Cape Poge to the Gut. New islands will be defined by the remaining highlands at John Oliver Point, the area by Caleb’s Pond Lane and at Cape Poge.
The recent news is that the commonwealth of Massachusetts is considering a $1.3 billion bond issue to provide infrastructure betterment to ward off impending losses due to rising sea levels. Based on federal research, Massachusetts generates approximately 1.2 percent of the nation’s carbon dioxide emissions, which equates to approximately 1/500th of the world’s emissions. If Massachusetts were to be entirely successful in applying its financial commitment to mitigate sea level rise, the effect would be to lower the projected rise along the Massachusetts’ coast by 0.1 inch. This does not provide the biggest bang for the taxpayers’ buck.

Wouldn’t it seem that a better application of the state’s $1.3 billion largess would be to invest in Massachusetts-sourced innovative technologies to diminish the consumption of fossil fuels, and thereby reduce emissions here and around the globe? Innovative technologies do not recognize state, national, or international boundaries any more than sea rise does. Innovation is viral. When put to use in China, India, and developing countries, it has far more impact on Massachusetts’ sea level than we do.
Is it possible to significantly cut emissions? Yes, and Chappaquiddick has a wonderful example. On Cape Poge, the northernmost nub of Chappaquiddick, there is a small community of families that are off the grid — in fact, way off the grid. From the Dyke Bridge north, there are no electric lines, telephone poles, storm sewers, public water or sewer, streetlights, paved roads, sidewalks, or hydrants. The residents depend on wells, cisterns, septic systems, composters, solar photovoltaic systems, big batteries, and some hand-delivered propane for generators to fill in the rough spots. All the households live comfortably over three seasons on Poge. Each is independent of one another and each is way, way off the Vineyard grid.

For the past 20 years, we are one of those families. Living on Cape Poge has led me to believe that throwback architectural designs enabling design with nature, advances in solar power, reverse-osmosis water systems, waste composting, along with promising advances in energy conservation and deploying Internet of Things (IoT) gadgets, can, and will, in my lifetime, produce zero-energy homes, businesses, and factories — eventually, entire ZE cities.

Whenever investments are to be made to diminish fossil fuel consumption or to lower emissions, it is not wise to pour money into Massachusetts’ antiquated infrastructure in the name of “climate.”  Infrastructure is a separate and long-overdue investment. Government must invest in American ingenuity, our ability to harness the best and the brightest minds and put them to the task, as we have done before in the industrial revolution or creating the atomic age, the space age, the computer age.  The next challenge to human advancement is to protect our planet from our own abuses by entering the zero-energy age.

Now is the time to get behind our best and brightest engineers, fully fund them, and tell us to fix it!

Victor Colantonio is one of the founders of Manhattan 2, a nonprofit, with Glenn Weinreb and Nobel Prize physicist Robert Wilson, looking to assemble a team of the brightest engineers to tackle innovations that reduce the consumption of fossil fuels.

Other rights are in jeopardy