Francis James Paciello, born Feb. 4, 1944, in an elevator at Doctor’s Hospital in Worcester, has died peacefully at home, surrounded by his loving family. 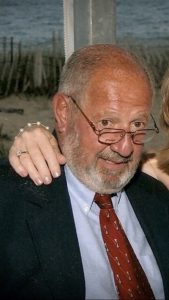 Fran was the son of Louis R. Paciello and Ida (Giuliano) Paciello. He grew up in the Lincoln Street neighborhood of Worcester, with friends too numerous to count. He was a mischievous boy, and loved sports. Although temporarily sidelined by polio, it never kept him down. He went on to play many sports, and football was his main passion. After graduating from Commerce High School, he went to work in construction. Years later he spent a short time in the restaurant business. It was in 1982 that Fran had an opportunity to move to Martha’s Vineyard. With hard work and determination, he created a wonderful life for his family.

Retiring in 2010, he and his wife traveled around the country, and eventually found their winter home in Satellite Beach, Fla. Fran spent many years drag racing nostalgic drag cars in the Northeast, and loved a good cruise around in one of his hot rods. Although he had a passion for football and drag racing, his greatest love was his family. He could always be found with a cold beer in his hand and a smile on his face watching his grandkids playing in his pool, tossing a ball around, or riding horses.

Fran is survived by the love of his life and wife of 51 years, Barbara (Daigle), his children Rachel (Paciello) and Jim Neville, Louis and Lyra Paciello. and his grandchildren, of whom he was most proud, and would often say they made his heart soar like a hawk: Lilly, Julia, Louis, Leo, and Rosalie Neville, and Vinny and Frankie Paciello. He is also survived by his baby sister, Lisa (John) Reece and many loving nieces and nephews. Fran was predeceased by his parents, his sister, Marie (“Chic”) Walden and her husband Leo, and his brother, Angelo (“Butch”) Paciello.

A celebration of Fran’s life is scheduled for Sunday, Sept. 22, from 1 to 5 pm at the Paciello home, 50 Red Pony Road, West Tisbury.

Memorial donations may be made in Fran’s name to Hospice of Martha’s Vineyard, 79 Beach Rd., Vineyard Haven, MA 02568.