James “Jim” Kageleiry died on Oct. 13, 2019. He was a couple months shy of his 96th birthday. Though he was born and raised in Dover, N.H., he visited Martha’s Vineyard often over the past 36 years, and made many friends on-Island. 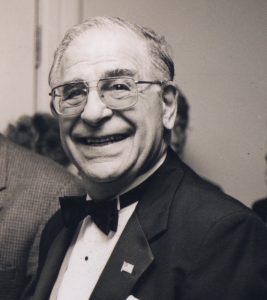 Jim was born in 1923, raised in Dover, and attended Dover schools. He graduated from Dover High School in 1942, the year he was elected captain of the basketball team that won the New Hampshire Class L championship. He was voted the best dancer in the class, a talent he demonstrated until just recently.

Jim was the son of Greek immigrants, Diamond and Charles Kageleiry, and the third of nine children. The family ran a soda shop and diner, Kageleiry’s Spa, for many years, which was the most popular high school hangout of its time. All family members were expected to help out in the business, and as young boys, Jim and his brother George sold newspapers on the streets of Dover, once meeting Babe Ruth at the Third Street train depot.

Shortly after graduation from high school, Jim joined the Navy and served for four years, mostly in Hawaii; after the war, he returned to Dover, and enrolled in the University of New Hampshire on the GI Bill, graduating in three years, in 1949.

Though he loved studying history at college, he decided to go into business, and became an agent for the New York Life Insurance Co., where he would work for almost 62 years, retiring at the age of 89 in 2012. He won myriad awards, and served on many committees.

Jim was intensely loyal to and proud of his hometown, and believed in giving back to his community, serving tirelessly on boards and committees. In 1979 he was named Dover Citizen of the Year, an honor of which he was very proud.

Family was everything to Jim. He married Frances T. White in 1958, and they remained happily married for 61 years. Jim and Fran had four children and eventually, nine grandchildren.

Beyond his professional and civic accomplishments, Jim was known as a good friend — kind, loyal, funny, and outgoing. He loved to learn new things, and read newspapers avidly every day of his life, starting when he was about 6. He was a great traveler, and visited close to 20 countries, but America was always his favorite. When he was young, he vowed to see all 50 states, a goal he achieved when he visited Alaska 20 years ago.

He is famous, at least in his family, for having hit a hole in one on the day the astronauts first walked on the moon. He was also that guy who would lead Greek dances — the one at the head of the line, jumping up and down with a handkerchief in his hand. He was lively.

On Martha’s Vineyard, he loved sitting on his daughter’s porch and reading, putting jigsaw puzzles together, or taking walks around Oak Bluffs to visit friends such as Henry and Dierdre Diodati, or Sue Dawson and Alison Shaw; or having meals with friends such as Chris Brooks and Louisa Williams. He often visited to attend his grandchildren Ian and Hallie MacCormack’s birthday parties.

He is survived by his wife Frances, of Dover; his daughter, Jamie Kageleiry, of Oak Bluffs, and her children Hallie and Ian MacCormack; son Chad and wife Sheila Kageleiry and their children Thea and James; son Paul and wife Rosalyn and their children Andrew (and wife Megan), Christopher, and Caroline; son John, and wife Lin, and their children Mya and Desmond; his brothers Peter, Harry, and Greg, and numerous nieces and nephews.

A wake will be held on Wednesday, Oct. 16, from 4 to 7 pm at Tasker Funeral Home at 621 Central Ave., Dover, N.H. A funeral Mass will be held at the Greek Orthodox Church of the Annunciation, 93 Locust St., Dover, at 10 am on Thursday, Oct. 17. In lieu of flowers, donations can be made to the cemetery fund of the Greek Orthodox Church of Dover, or a charity of one’s choice. See the online guestbook at taskerfh.com/obituary/james-kageleiry.