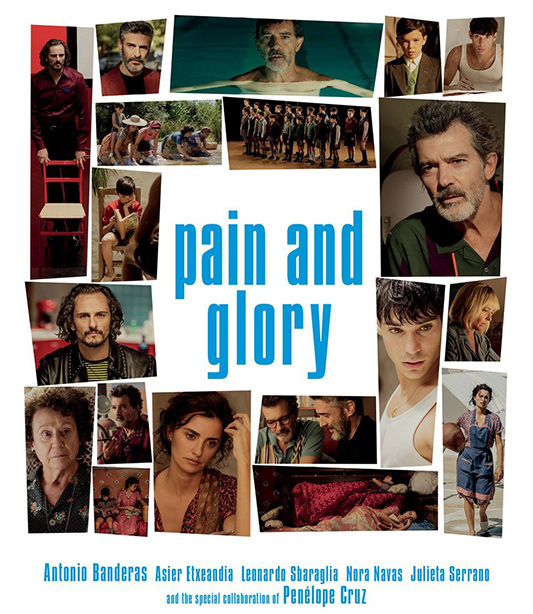 Pedro Almodóvar’s latest film, “Pain and Glory,” is playing at the M.V. Film Center. Without being showy, it is a tour de force. Antonio Banderas stars as filmmaker Salvador Mallo. One of Almodóvar’s most frequent collaborators, his role won him a Cannes Best Actor, his first major award in the category.

“Pain and Glory” opens with a shot of Salvador submerged in a pool, his arms akimbo in an almost Christ-like pose. Is he drowning or meditating? This aging director is plagued with physical ailments: unsuccessful back surgery, migraines, asthma, panic attacks, choking fits, and tinnitus. After a triumphant career, he is no longer working, and depressed by it and the aging process.

Flashbacks take the viewer into Salvador’s childhood, beginning with a scene of his mother Jacinta (Penélope Cruz, another Almodóvar regular) washing laundry in a river and singing with several other women as Salvador plays nearby. It is a lyrical and vibrant sequence, a signature piece of Almodóvar filmmaking that leavens the film’s mood.

Things begin to look up for Salvador when he receives a request to appear at the 30th anniversary tribute to his film “Sabor” (Spanish for flavor or taste). The invitation sends him to Alberto Crespo (Asier Etxeandia), who starred in “Sabor.” Salvador and Alberto have not been on speaking terms since the film, in no small part because of Alberto’s heroin addiction. Alberto agrees to appear with Salvador at the tribute, and he offers Salvador a heroin hit (called “chasing the dragon”), which brings the director instant relief from his back pain.

In another flashback to his childhood, Salvador and his parents move into a below-ground residence, and Jacinta enlists Eduardo, an illiterate painter, to whitewash the family’s living quarters in exchange for having a precocious Salvador teach him to read and write.

A skillful storyteller, Almodóvar enriches the film with interesting details like these, expertly weaving flashbacks to Salvador’s childhood into the main narrative. Eduardo, who draws a portrait of Salvador, plays an important role later.

Salvador returns to visit Alberto for more heroin, and while the filmmaker is zoned out on the drug, Alberto reads a memoir Salvador has written on his computer. Entranced by it, Alberto asks Salvador to let him perform it in a monologue. As negotiations over drug use progress, Salvador eventually agrees. He doesn’t attend Alberto’s performance, but it leads to his reconnection with Federico (Leonardo Sbaraglia), a former lover. So in addition to the flashbacks to his childhood, Salvador revisits past relationships.

In one of Almodóvar’s more interesting devices, Federico looks like a double for Salvador. He also spends time with his mother as an adult, another way Almodóvar fleshes out the narrative. Other Almadóvar touches include making Salvador’s apartment a virtual duplicate of the filmmaker’s. Art and reality intertwine frequently in “Pain and Glory,” and as usual Almodóvar paints with vivid colors.

“Pain and Glory” won a Best Composer prize at Cannes, where the filmmaker was nominated for a Palm d’Or and a Queer Palm. Fans of Almodóvar’s work, from “Woman on the Verge of a Nervous Breakdown” in 1988 to “Talk to Her,” which won him a Best Directing Oscar in 2002, will appreciate the mastery of “Pain and Glory.” It should send those unfamiliar with his work in search of other Almodóvar films.

“Parasite,” which won director Bong Joo-ho the Cannes Palme d’Or and played at the M.V. International Film Festival, returns to the Film Center this weekend. Living on the edge of poverty, the Kim family hooks up with the wealthy Parks and cons them into providing jobs for all four of the Kims. When the Parks go away for the weekend, the Kims take over the house and party. A hit at the Film Festival and highly regarded by critics, the film is a mix of comedy and misadventures.