I’ve known Cassie for more than eighteen years. She’s a little old lady cat these days, but still full of personality. Cassie has a condition that frequently affects elderly felines — chronic kidney disease (CKD). This age-related form of gradual, progressive renal failure impacts the body in many ways owners often don’t realize such as increased risk of hypertension and/or anemia. The most common side effect, however, is dehydration, and dehydration often leads to another common woe of senior citizens … constipation.

The kidneys prime function is filtering the blood to remove waste. During this process, they recycle as much water as possible back into the body. Healthy young animals produce relatively small amounts of concentrated urine. With advancing age, the kidneys become less efficient at recycling water. Affected cats produce larger quantities of more dilute urine. They drink more to compensate but eventually can’t or won’t drink enough to stay hydrated. The body looks for other sources of water, like food in the intestines, reabsorbing as much fluid as possible as ingesta moves through the digestive system, resulting in dry, hard stools that may be difficult to pass.

Chronically constipated cats are also prone to a condition called megacolon in which the colon becomes distended and has reduced contractility. This results in abnormally large balls of feces that are extremely difficult for the cat to expel. It’s called obstipation and often requires the cat to be anesthetized so the veterinarian can … well … let’s just say it involves latex gloves and lots of lube. Happily, Cassie was not obstipated and did not have megacolon. She was just dehydrated and a little constipated.

“I’ve been giving her these,” her dad said, plunking two small brown bottles on the table. Both were over-the-counter “remedies” marketed specifically for pets. The first was “hemp oil.” That’s fodder for another column. The second product claimed it “stabilizes bowel movements and promotes soft stools in cats with constipation.” The active ingredients were three plants: Haritaki fruit, Amalaki fruit, and Bibhitaki fruit. “They’re berries,” her owner volunteered. I nodded vaguely. The inactive ingredients were deionized water, natural bacon flavor, and vegetable glycerin.

“I have no idea what these fruits are,” I responded. “Let me go look them up.” Which brings us to today’s topic: The use of over-the-counter products like these and how to research and be wise consumers and pet owners. We need two mindsets for a balanced approach. First, do no harm. Second, keep an open mind. Please notice the order of these two things. Just because someone markets something with a picture of a cat on the label does not guarantee it is proven safe or efficacious for kitties.

They can’t sell stuff that doesn’t work or can hurt your cat, right? Wrong. Many pet supplements and remedies fall in a regulatory grey zone in terms of oversight. These products are often minimally tested, minimally regulated, and occasionally actually harmful, yet pet owners purchase and use them indiscriminately. I am sure there are many that are truly useful but how do we know which ones? I like evidence-based medicine. Scientific double-blind controlled studies. I don’t trust anecdotal tales about how some bottle of something miraculously cured your friend’s cousin’s cat.

You also can’t completely trust your own perception. Double-blind studies done with pets on supplements such as those to help with joint pain have shown there is actually a thing called “owner placebo” effect. In other words an owner in a test study observed that the product was working, making their pet better, when in fact the animal wasn’t even getting the real supplement, just a placebo. “It seemed to help the constipation,” Cassie’s owner said. Was this true? Or a case of owner placebo effect? “The inactive ingredients included glycerin,” I said, “which is a laxative in its own right … but let me go look up these berries.”

A 1988 article in the International Journal of Cardiology entitled “The Ayurvedic medicines Haritaki, Amala, and Bahira reduce cholesterol-induced atherosclerosis in rabbits” showed these berries had some effect lowering cholesterol in bunnies. Okay. Not really helpful. Wikipedia then taught me this combination is an Ayurvedic herbal formula called Triphala, which means “three fruits,” all indigenous to India. Ayurvedic medicine is an ancient traditional Indian system using a “natural” and holistic approach to health. Treatments are derived primarily from plants (but may include animal, metal, and mineral) as well as diet, exercise, and lifestyle adjustments. Whether an Ayurvedic approach has scientific validity is yet another column, right after the one on hemp oil, but it is pertinent to know I found multiple sources advising some Ayurvedic herbal preparations, as many as one in five, were found to be contaminated with lead, mercury, or arsenic, sometimes in potentially toxic amounts.

I did find references to Triphala use for constipation in people. In an article in the August 2017 Journal of Alternative and Complementary Medicine entitled “Therapeutic uses of Triphala in Ayurvedic medicine,” a search of the PubMed database reviewing current literature on the therapeutic uses and efficacy of Triphala concluded “… numerous additional therapeutic uses described both in the Ayurvedic medical literature and anecdotally are being validated scientifically. In addition to laxative action, Triphala research has found the formula to be potentially effective for several clinical uses such as appetite stimulation, reduction of hyperacidity, antioxidant, anti-inflammatory, immunomodulating, antibacterial, antimutagenic, adaptogenic, hypoglycemic, antineoplastic, chemoprotective, and radioprotective effects, and prevention of dental caries.”

So who knows? The Triphala might actually be helpful. I couldn’t say for sure. I suggested Cassie’s owner try canned pumpkin, increased fluids, milk, a touch of metamucil or miralax in her food, and, if needed, an FDA-approved prescription laxative. There are thousands of insufficiently evaluated over-the-counter products out there. Products that may be useful but simply do not have enough scientific testing or quality control to guarantee safety or efficacy. Not for people. Even less for pets. Educate yourself. Do your research. Take claims on labels and testimonials on websites with a grain of salt, and always consult your veterinarian.

On My Mind: Strategies for pandemic helplessness 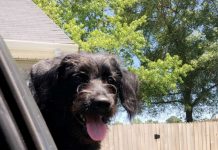 Was always our go to place .

Keep an eye out for the band Era of Good Feelings, as they bring positive vibes to socially-distanced venues around the Island.
#Coronavirus #mvtimes #news #marthasvineyard ... See MoreSee Less

In an eleventh hour decision, Oak Bluffs selectmen rescinded their vote to close Vineyard Avenue to vehicle traffic for trick-or-treaters on Halloween night amid concern about the growing number of confirmed COVID-19 cases over the past week.
#Coronavirus #mvtimes #news #marthasvineyard ... See MoreSee Less