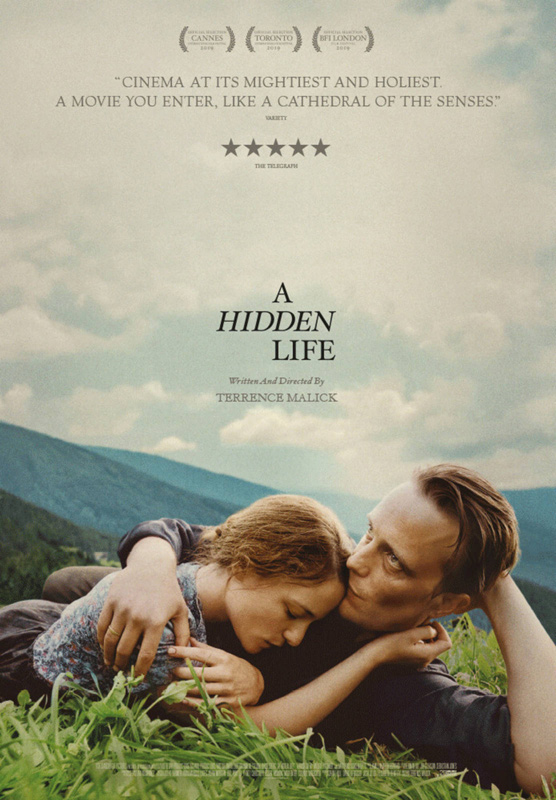 “Honeyland” and “Parasite” return to the M.V. Film Society this weekend. Coming at the beginning of February is “The Hidden Life,” Terrence Malick’s latest film. Nominated for Oscars three times, Malick is celebrated as the writer for “Badlands” (1973), “Days of Heaven” (1978), and “The Thin Red Line” (1998). The title of this film comes from a George Eliot quote about moral courage, a frequent theme in her writing. Starring August Diehl as Franz Jägerstätter and Valerie Pachner as his wife Fani, “A Hidden Life” is based on a true story from WW II.

Malick introduces the couple, Fani’s sister, Franz’s mother, and their three daughters in the idyllic Austrian countryside where they farm. Shots of the Alps, nearby meadows, and waterfalls dominate without a great deal of dialogue.

The film takes place after the 1938 Anschluss, when the Germans took over Austria. A resistant Franz is conscripted for military training, and goes, but somewhat unwillingly. St. Radegund, the town where the Jägerstätters live, seems oblivious to the impending Nazi threat. Some shots come from the actual village, and the farmhouse the couple lived in. The family attends church and gets along with their neighbors until they begin to get suspicious of Franz’s unwillingness to serve in the army.

Once Franz is drafted in 1943, he refuses to swear an oath to Hitler, and claims status as a conscientious objector. He is imprisoned and threatened with execution. The neighborhood priest urges this religious man to relent and serve. Because of Franz’s religious convictions, he continues to refuse.

Meanwhile the St. Radegund villagers ostracize Fani and her family, even pelting the children with mud. Fani, her sister, and Franz’s mother struggle to keep the farm going. Many scenes show the suffering Franz undergoes as he waits for the outcome of his chosen position.

Malick includes archival footage of WW II and Nazi atrocities. The director uses light and a focus on the natural world to balance the scenes of Franz’s imprisonment and eventual execution. The director also relies on multiple voiceovers to convey the sense of conviction the couple has for Franz’s choice and his spirituality.

Particularly in light of the ongoing Middle East wars currently underway and involving the U.S., “The Hidden Life” is a welcome antiwar statement. It is an example of a real-world man easily forgotten, a haunting and powerful film that viewers will appreciate.

Information and tickets for “A Hidden Life,” as well as other Film Society offerings, are available at mvfilmsociety.com. A list of films and screening times at Entertainment Cinemas in Edgartown is available at entertainmentcinemas.com/locations/edgartown.