What’s the best way to spend a lunch break on a 55° March afternoon? If you’re in Vineyard Haven, give Chef Amy’s food truck a try.

Reporter Brian Dowd and I were both hungry and itching to get out of the office, so we walked down to the food truck, located in the parking lot of the old hardware store, across Beach Road from West Marine.

You can smell the food before you see it — the pleasant smell of a wood-fired oven and meat and spices on the grill. That, plus the warm spring sun, almost made me feel as if it were summer already.

As a food truck, Chef Amy’s is special. Unlike the few other trucks on the Island, Chef Amy’s is open for most of the year, and stays stationary at 61 Beach Road. Johnson considered a brick-and-mortar location, but the high price of Island real estate proved a challenge. I certainly don’t mind — the idea of a food truck makes the whole experience that much more unique.

After much deliberation, I settled on the Grilled Cheese with a side of vegetables, while Brian (my meat-eater for this assignment) got the Smash Cheeseburger and the Red Velvet Cake for dessert. As an extra treat, Chef Amy also gave us samples of the Badass Ribs, Jerk Chicken, yellow rice, and the usual rice and beans. We took our food and headed over to the picnic tables near the Tisbury Marketplace, and took a seat near the lagoon.

The Grilled Cheese was just the thing to eat on a summerlike day, and the vegetables were some of the most well-seasoned I’d ever had. However those vegetables are cooked, it makes for a uniquely zesty and tad-spicy taste that I’d never encountered before. Brian’s burger was juicy, slathered with cheese and a special sauce. He deemed it a melt-in-your-mouth, tasty meal.

We both shared the Red Velvet Cake (which I’m still having daydreams about), and brought back the ribs and chicken for Lucas Thors, another Times reporter. After tasting a sample, he declared, even though he’d already eaten lunch, he “had to make room for this.” He then proceeded to tell me the ribs were “freaking delicious,” and that the yellow rice and the beans and rice perfectly complemented one another, a point on which I’d have to agree.

All in all, we had a fabulous meal that left me wishing the summer could come that much sooner. 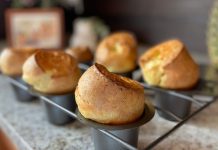