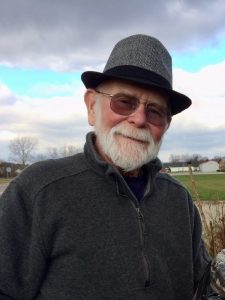 John was drafted out of Northeastern University and served in Vietnam. His family roots were in New Hampshire and he spent his summers on the farm on Lyman Mountain in Madison, NH.

On the Island, he had an accounting practice and when he retired, he had a television store and drove a school bus. He also drove tour buses in the summer and said that was the most fun job he had ever had.

In his spare time, he loved traveling, fishing, working with the community, and spending time with friends and family, both two and four legged.

He was deeply concerned about folks who were homeless. He took a group of students to Boston to work with a homeless ministry there and did what he could quietly and behind the scenes to provide warm clothes to those in need, especially here on the Island.

He loved learning and especially enjoyed studying weather. He was involved with Mount Washington Observatory, taught lightning safety and weather at Fern and Feather summer camp and reported daily precipitation for COCORAHS.

John is survived by his wife, Sharon Pearson, daughters, Elizabeth Pearson, Carrie Hunter and Victoria Fano, son, John Pearson, and stepsons, Philip and Isaac Macy. He was a loving grandfather and great-grandfather to Sean and Kathleen Crosby, Nicole and Emily Pearson, Eli and Alex Fano, Abigail and Charlotte Macy and Ella Maciel.

A memorial service was postponed to a later date to be announced.

Arrangements are under the care of the Chapman, Cole and Gleason Funeral Home, Edgartown Road, Oak Bluffs. Visit www.ccgfuneralhome.com for online guest book and information.

Updated to indicate the memorial service was canceled. -ed.