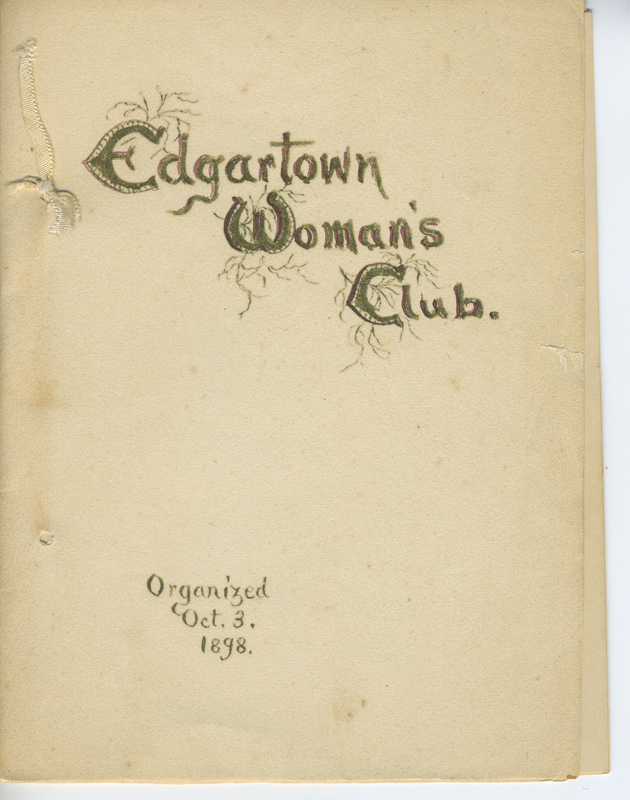 The oldest club on the Vineyard, in fact on the whole Cape and Islands, dates back to 1898 and was started, not surprisingly, by a Mayhew: Miss Sarah Jo Mayhew, a descendant of the first white settlers here. At what was then called the Edgartown Woman’s Club’s 50th anniversary, Mayhew wrote that “after enjoying the hospitality and mental stimulus of a Lynn’s Women’s Club, I began to wonder why a similar club could not be organized in my hometown … My wonder and enthusiasm quickly developed into real intention to found such a club for study and improvement.” She teamed up with Mrs. Mary Wesley Worth — “a broad-minded woman of advanced thought,” Mayhew says.
Declining the presidentship, Mayhew gravitated to more intellectual pursuits because she “especially wished to be free to conduct and develop a Class in Current Events and Literature.” This dedication to edification is evident in the club’s early constitution, which stated its objectives: “To broaden individual ideas, to develop latent power, to obtain a practical utility of general knowledge, and encourage social discourse.”
Literature class programs included such titles as “Historical Events During the Reign of Henry VIII” and “Interpretations of Shakespeare’s Heroines.” There was a Tourist Class, with a focus on history and geography that brought about vicarious travel with topics such as “Ruins of Ancient Cities” and “The Women of Damascus.”
Over the decades, other programs evolved — including one for Domestic Science, with topics such as “The Vacuum Cleaner and Its Practicality.” Committees included those on public health, mothercraft, art, child welfare, social welfare, religion, American citizenship, and international affairs. The yearlong program meeting guide in 1899 included 51 gatherings, along with seven receptions. By the mid 20th century, there were musical programs, fashion shows, and auctions. In the late ’60s and early ’70s, according to current member and president from 2002 to 2004 Carolyn O’Daly, who wrote a history of the club, the upheaval in the rest of the world did not pass the ladies by. Local legislators’ names and addresses were printed in the handbook with encouragement to write to them about political issues.
Originally, members were the presenters at meetings, unlike today, when outside speakers are invited. “Our speakers have included artists, poets, authors, museum curators, medical personnel, and professionals who specialize in senior services, with an occasional florist and makeup artist,” O’Daly says. From 1898 to 1985, members hosted the meetings, which included classes, business meetings, entertainments, socials, and occasional field trips. The club settled into its current home at St. Andrew’s Parish House in 1986.
O’Daly also notes that when civic responsibility and philanthropy were added, the motto became, “Not for self, but for all.” Philanthropy continues to be something the club pursues. “All money donated comes directly from the ladies themselves from a goodwill offering in October that goes directly to Island veterans, an auction of gently used items in November, and dues. Our scholarship has changed from a graduating high school senior to summer camp for needy Island children,” O’Daly explained.
Until about the mid-1900s, membership was limited to 50 women, and then increased to 100. The archaic means of determining eligibility, with members dropping black or white balls into a voting box, was done away with in 1975. Then-president Norma Bidwell explains that “the one thing I think I accomplished was that from the early days, they would vote on people with white and black balls. Two black balls meant the lady was not accepted. When I heard about this, I was very happy to go down to what was at that time the Historical Society [now the Martha’s Vineyard Museum] and take all that paraphernalia down, and say, ‘This belongs to history.’ I felt so good about that. And nobody said, ‘Oh, you shouldn’t do that.’ I think other people felt a little sheepish going through that process.”
Sponsorship, O’Daly explains, “is now only a technicality, and any woman on the Island is not only welcome but encouraged to join.”
Jean Andrews, who became a member in 1991, joined in a bit of a roundabout way. She had been asked to speak at the club at one of their special programs about the Portuguese on Martha’s Vineyard. She got a thank-you note asking her to join, “and that’s when I joined, because I thought that they’re such a wonderful group of ladies. And I always thought I would never join a group, but I was sold on them. It’s been a wonderful association,” she says, adding, “I became president in 2008, and it’s the only group I belong to besides my church choir.”
Once the current crisis passes and the regular meetings resume, clearly this 122-year-old club is one to check out for its historical roots, enthusiasm of its members, and future endeavors.

RECIPE CAN GO IN A BOX? JUST ADD TO ONLINE VERSION

The following recipe is from “Before and After: Appetizers and Desserts from the Woman’s Club of Martha’s Vineyard,” from 2007. The idea was from a member of the club, Connie Cowan (now deceased), who gave a lot of cocktail parties with just appetizers and desserts, and she liked the idea of a cookbook with just “before and afters.” Contact Carolyn O’Daly at codaly47@gmail.com to inquire about copies.

Combine all ingredients. Chill to blend flavors. Serve with crackers and/or raw vegetables.