Grace Holman died on April 5, 2020. Grace, native name “Swan Song,” was born on Feb. 24, 1925, to Helen Handy and Edward Lewis Sr. She was raised in Oak Bluffs, there she attended grade school and graduated from Martha’s Vineyard Regional High School.

Grace later married Melvin Holman and moved to New York City, where they lived for many years. 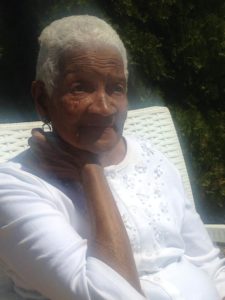 They returned to Martha’s Vineyard upon her husband’s retirement, and lived there for their remaining years. Grace worked at Medi-Save in Vineyard Haven, where she made friends that would last a lifetime.

She enjoyed early morning coffee with neighbors and annual summer lobster parties with her beloved “School Street Family.” You could often see her strolling down School Street to pick up the mail and grab some groceries at Reliable. Grace was always ready with a witty comeback and a giving heart.

Grace “Swan Song” Holman was a proud member and Elder of the Chappaquiddick Wampanoag Tribe.

Grace will be laid to rest on Tuesday, April 7, 2020 at Oak Grove Cemetery in Oak Bluffs. A memorial service will be held at a later date, where everyone may share their memories of the person many call Nana. In lieu of flowers, donations can be made to the Martha’s Vineyard VNA (Visiting Nurse Association).