Two Dukes County Sheriff’s Department employees were self-quarantined for 14 days after showing symptoms of novel coronavirus, but the department has had no positive cases, Sheriff Robert Ogden told The Times. One of the employees was tested and the results came back negative, he said. Both had to be cleared by a doctor to return to work.

No inmates at the facility have shown any symptoms, and protocols are in place to follow Centers for Disease Control (CDC) guidelines of social distancing, Ogden said.

The sheriff’s department has a nurse who can test anyone showing symptoms, but those tests still have to be sent off-Island. A tent brought to the Island by the Massachusetts National Guard provides a location for employees to be screened before entering the facility and tested if necessary. Their temperatures are taken and they’re asked about any possible symptoms, Ogden said.

“We’re trying not to use up tests because they’re so limited on the Island,” he said.

Ogden reiterated that the inmates are in a good environment, all in individual cells more than 6 feet apart. “They’re safer where they are,” he said.

If someone is at the facility in the lockup, there is a teleconference system in place for arraignments. He said the individuals incarcerated also have access to tablets in their cells so they can have access to education, entertainment, and counseling in their cells. “They aren’t accessing the Internet. They aren’t accessing the outside world,” he said. “It’s a completely closed system.”
Ogden praised a recent decision by the Supreme Judicial Court in response to a lawsuit brought by civil rights groups.The state’s highest court ruled that nonviolent pre-trial individuals could seek release, but it would require a hearing and be decided by a judge. “I would like to recognize and respect the court’s decision on it,” he told The Times, noting the unified front shown by the state’s 14 sheriffs. “We understand the ramifications that mass release of individuals in our custody would have. It’s a scary concept.”

None of the 10 individuals currently held in the 1873 building in Edgartown fits the criteria for a hearing, Ogden said.

The sheriff also praised the collaborative effort by sheriffs statewide who meet on a daily conference call. He singled out Barnstable County Sheriff James Cummings who sent a work crew to the Island to fix the door on the holding cell that’s used by the Island’s police departments. Ogden couldn’t get his usual contractor to fix the cell door because of the stay-at-home order and construction bans, he said.

“It’s essential,” he said. “It’s the only lockup on the Island. Without it, it would have compromised our ability to provide that service to the towns.” 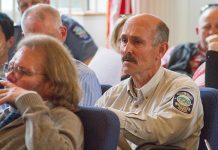 Is time right for new positions? 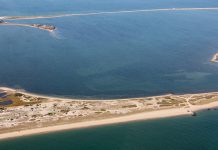