On March 18 West Tisbury installed radar speed signs on Lambert’s Cove Road near Lambert’s Cove Beach. The internally lit signs aren’t a first for the town but are part of a small but growing signage pool previously all but nonexistent on the Vineyard outside school zones.

West Tisbury selectmen unanimously approved the signs on April 24 on the recommendation of the town’s Complete Streets committee. Complete Streets is a Massachusetts Department of Transportation program geared toward providing funds to make roads safer for pedestrian, bicycle, and vehicular traffic.

John Rau, an zoning board of appeals member in West Tisbury, told The Times the signs did not require ZBA or planning board review. Rau, who lives in the vicinity of the new signs, said he sees them as a positive safety step.

“In my opinion, safety is more important than two blinking lights that don’t seem to erode the rural character very much,” he said.

On the coattails of neighborhood complaints and a costly traffic study, similar signage was installed on Meshaket Road in Edgartown about five years ago, according to Edgartown town administrator James Hagerty.

A couple of years back former Edgartown highway superintendent Stuart Fuller also installed a blinking stop sign at the intersection of Barnes and Edgartown-West Tisbury Roads, Hagerty said. While there were complaints about the sign, a hazard was present, he said.

Both installations preceded Hagerty’s tenure in office, he noted.

Such signs aren’t under the auspices of the Martha’s Vineyard Commission, according to executive director Adam Turner.

“We don’t control the traffic controls on town and state roads,” he said. However, he noted when conditioning Developments of Region Impact (DRIs), the MVC does employ practices embodied in the International Dark Sky Association as a hedge against light pollution. A fundamental philosophy of Dark Skies is that lights must not generate glare and “trespass”. Turner described this as essentially ensuring lights are downward-facing.

Concerning Lambert’s Cove Road, Rau pointed out a lot of kids swim near to the road at Seth’s Pond and a curb on speeding is important.

“Hopefully those [signs] will prevent people from speeding,” he said.

West Tisbury Police Chief Matt Mincone said a mobile radar sign was used in that location for years. It was only after somebody backed into it and crushed it that a fixed solution was sought to continue to slow motorists down on what he described as a “dangerous corner” where a high number of people walk, especially during the season. 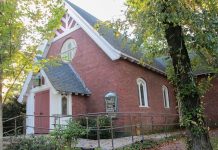 I hope the Tisbury cops don't let these protestors block traffic again especially when a ambulance is on the way to the MVH and had to take the back roads!! ..... No follow up from the press, the selectmen or the cops as to why they were allowed to block 5 Corners of all places!.. I would love to hear a explanation because "I would Assume" (no threats) if this is allowed again All Hell Is Going To Break Loose!.... VHPD has been having the usual problems over & over again and I am sick of complaining!!

Could you imagine living your life so filled with hate that you make a point to regularly block the cars of POC and assert whatever perceived power you think you have? What a pathetic man. I hope charges are brought the next time he does this.