The Steamship Authority has changed course on masks after previously instituting no requirements for them since the start of the pandemic. Though it will now require passengers to wear them, the ferry line has continued to insist it has no power to deny passage for anyone who isn’t wearing one.  The mask policy went into effect Thursday following a press release and came a day before Governor Charlie Baker issued a statewide requirement for mask usage.

The SSA is requiring face coverings for passengers waiting to board a boat and to disembark. Those who don’t want to wear a face mask or covering onboard will have to sit outside or in an “appropriate area,” according to the release.

On Friday, Oak Bluffs selectmen chair Brian Packish, who remains furious over the unsafe condition of the Oak Bluffs ferry terminal, described the mask measure as “a day late and a dollar short.” Packish said he was at a loss for why it took so long to put such a policy in place.

“It seems it could have been put in place a while back,” he said. From there, he directed criticism to the SSA management, a frequent target:

“Unfortunately if you’re looking for clear and effective leadership out of the Steamship Authority, you’ve been living under a rock.”

SSA chair Jim Malkin said the policy was the result of a lot of hard work behind the scenes between the SSA, the U.S. Coast Guard, the Massachusetts Department of Transportation, and attorneys.

Now that the policy is instituted, Packish backed it.

“I think it makes sense,” he said. “We’ve done one in the town of Oak Bluffs as well.”

Dukes County Commissioner Christine Todd said it didn’t go far enough. Todd said she believed the SSA should deny passage for anyone not wearing a mask.

“The bottom line is I think everyone should be wearing masks on the Steamship [Authority],” she said. “I don’t think it should be discretionary.”

The SSA faced intense backlash this week on social media as passengers, many of them commuters arriving on the Vineyard to work, showed up without wearing masks or face coverings. The Steamship Authority requires its employees to wear face coverings in its public settings, including maintenance facilities, terminals and vessels, where physical distancing measures (i.e. physical separation of 6 feet or greater) are difficult or, in some cases, impossible to maintain. “The policy is consistent with recommendations from The Centers for Disease Control and Prevention (CDC). Adherence to this policy will be ensured by the employees’ supervisors,” the release states. “All passengers when boarding, disembarking and while onboard the Authority’s vessels are required to wear a cloth face coverings in interior passenger areas, including vessel freight decks. Passengers who choose to remain in their vehicles when boarding shall be required to remain inside their vehicles for the duration of the voyage if they do not possess a cloth face covering to wear outside of their vehicle.”

Earlier this week, the SSA insisted it required a mandate from the governor or the U.S. Coast Guard to implement such a policy. Despite policies in Falmouth that require masks in all public places and on the Island requiring construction workers to wear appropriate PPE, the SSA said those policies were not something they or their passengers had to follow.

But on Thursday there was a change of heart.

“Any passenger not utilizing a cloth face covering may have their travel affected in the following ways:

▪       They may be queued for boarding onto the vessels separately from those passengers using a cloth face covering.

▪       They may be directed to sit in a designated exterior seating area or another area as determined by the Port Captain or the master of the vessel.

▪       They may be directed to travel on a different vessel voyage for same-day travel.

▪       They may be directed to stay in a vehicle, if available, on the vessel’s freight deck.

Passengers are strongly encouraged to wear their cloth face covering on terminal property where physical distancing measures are difficult or impossible to maintain.”

The SSA won’t be making masks or face coverings available for customers “due to supply deficiencies,” according to the release. “These changes were communicated Thursday, April 30, 2020 to Authority staff for immediate implementation. Shoreside and vessel personnel will communicate the policies directly to passengers as they board, and additional signage and communications will be introduced in the coming days.”

In the release, SSA general manager reiterated that the lack of an order puts the SSA in a difficult position.

“The Authority’s opinion has been, and continues to be, that it cannot legally deny travel to customers who are not wearing a face covering without an executive order from a state or federal authority,” Davis said. “By directing those customers who choose not to wear a face covering to designated areas away from other passengers, we feel we have found a practice that will provide a balance between our obligation to provide travel to and from the islands and our sincere desire to keep everyone as safe as possible.”

Steamship Authority spokesman Sean Driscoll made it clear Thursday night the policy did not go so far as to prohibit those without masks from boarding.

“We do not believe we have the authority to deny passage based on whether or not a passenger is wearing a face covering,” he said. He said that also extended to those who may have a high temperature.

“We don’t have the authority to deny someone if they have a fever,” he said. Since SSA doesn’t test passengers, it’s questionable how they would be able to discern feverishness anyway. The ferry line does however test vessel crews.

Rogers said he recently traveled on an SSA ferry and was dismayed to see during each crossing “a number of people” not wearing masks or observing proper social distance. He also said he didn’t observe crewmembers wearing masks. He said he felt less concerned about that because he understood the crew must pass through regular screening protocols.

Those protocols involve a thermal scan, Tisbury board of health member Michael Loberg said. “We’ve provided them with infrared temperature probes to take the temperature of their employees.”

Loberg said this occurs daily when the crews first come on the vessels and when they leave.

Testing takes place only in Woods Hole and Hyannis, he said. “We don’t take temperatures of anyone else but the vessel crews,” he added. Terminal personnel, for example, must complete a daily questionnaire, he said.

Asked why passengers aren’t thermally tested, Driscoll said such testing was something outside  “the realm of out control” of the ferry line. 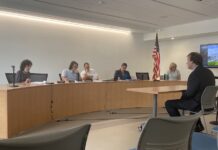