Paul Allen Medeiros, 65, of Lempster, N.H., died on Wednesday, May 6, 2020, at the Dartmouth Hitchcock Medical Center in Lebanon, N.H., after a long and difficult illness. Paul was married to Laurie Anne (Barry) Medeiros. 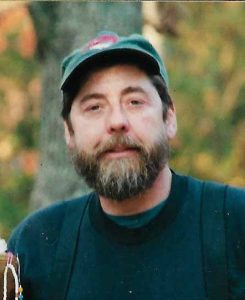 Paul was born in Oak Bluffs on April 26, 1955, son of Raul B. Medeiros Jr. and Cora (Simpkin) Medeiros. Paul was raised in Vineyard Haven, and spent most of his life, alongside his wife, children, and beloved pets, residing in the masterpiece of a home that he built with his father. Paul graduated from the Martha’s Vineyard Regional High School, and went on to trade school, specializing in the electrical trade in the construction industry. His efforts resulted in his becoming a top-notch electrician who was dedicated to quality work, and determined to “put a spark in your life.”

Aside from his work, Paul’s favorite things were all centered around the love of his family, and getting out into the natural world. He loved camping, and causing trouble just enough to bring a nervous, but anticipatory smile to all those who dared to watch. A bit of a pyro, his campfires had to be massive, both for warmth as well as spectacle. It would be a guarantee that one of those spectators would be a beloved pet, as Paul had a strong connection with all his pets, and found great joy in spending time with them.

Paul was known by many nicknames, and wore many hats. One of his greatest family legacies is his contribution to the cleanup of family dinners at Gram and Pa’s. Equipped with a fork and dinner roll, he’d circle the kitchen like a shark, and ask, “You gonna eat that?” Without waiting for a response, he would scoop up the food on the plate and be on to the next slow-moving family member to see if they needed any assistance in the cleanup of their “leftovers.” If you were to go looking for him after that, you’d be directed to the couch, where he would be resting from all of the festivities (a.k.a., food coma) in pure bliss.

Paul was also a talented mechanic and builder. His skills were learned from his father, and motivated by the love of the process, and a determination to fix what had been broken. Whether building a homemade tractor, creating a birdhouse, or adding another outlet so there was always easy access, Paul was a craftsman. Oh, and if you needed something done immediately, all you had to do was call Paul, and he’d be there. We have lost a light in our lives, and our family, but these wonderful memories of his accomplishments, love, and mischievous play will always be with us, and surely, not forgotten.

Paul was predeceased by both of his parents, as well as his brother, Steven R. Medeiros, of Kennesaw, Ga. Surviving Paul are his wife, Laurie; his son, Matthew Raul Medeiros, and daughter, Katelin Belle Medeiros; his brother, David J. Medeiros of Edgartown; and his sisters, Joan E. Medeiros of Warner, N.H., and Kathy J. Rogers of Vineyard Haven; and numerous nieces and nephews.

A private service was held on May 11, where Paul’s niece Joanne Ritter presided, and eulogized him as he was laid to rest in his family’s plot. Due to COVID-19, a public celebration of his life is to be held on the Island at a later date.

Condolence cards and any memories of Paul to share may be mailed to the Medeiros family at 114 Breezy Hill Road, Bradford, NH 03221, and donations in Paul’s memory may be made to the Vineyard House via online form or mail to Vineyard House Inc., P.O. Box 4599, 56 Short Hill Road, Vineyard Haven, MA 02568.