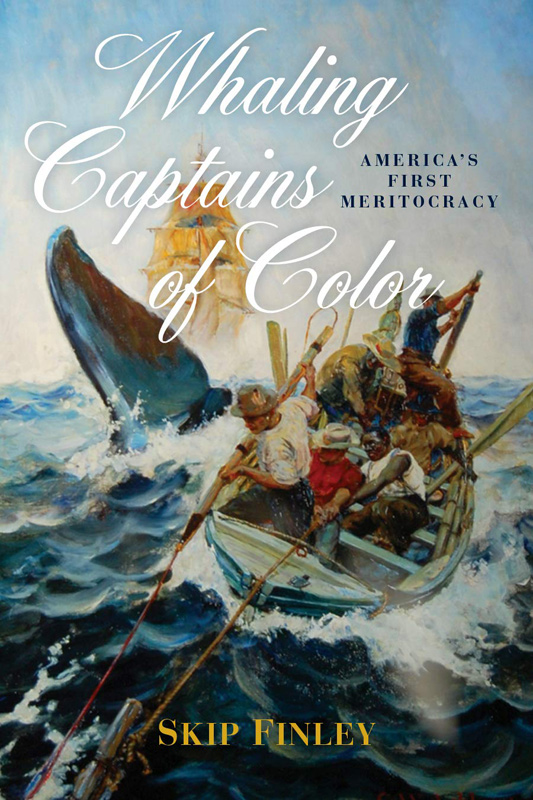 In “Whaling Captains of Color: America’s First Meritocracy,” Island writer Skip Finley has produced an extraordinary work that will change your perspective on the highly romanticized whaling era in American history, and the role of people of color in a trade that brought whalers fortunes and death.

Our portrait of whaling has been shaped by “Moby-Dick,” the classic story of obsession, revenge, and the ageless battle between good and evil. Author Herman Melville introduced us to the skill of Wampanoag harpooners, to the excitement of a ”Nantucket sleighride” and the call “Thar she blows!” He does not describe in detail the savage onboard environment, featuring floggings, mutinies, danger from the sea and its prey, and the inevitable, inedible food endured by several dozen men on voyages, often lasting years, in 100-foot boats.

Finley’s work does that, using accounts of the men who lived the life. Finley has done the research work, uses a sparse, direct prose style, and lets the story tell itself, using the words of the men who lived it. He notes that the overwhelming majority of first-time whalers never did it again.

In the late 18th century, and throughout the 19th century, 20 to 30 percent of captains and crews were composed of free men of color. Finley estimates that whaling captain Paul Cuffe, son of a Cuttyhunk freed slave and a Gay Head (Aquinnah) mother, was, by 1860, the wealthiest black man in America, three years before the Emancipation Proclamation.

Skilled and lucky captains could return with whale oil cargoes worth more than $1 million in today’s dollars. Men of color were also boat designers, and one, Lewis Temple, designed a retractable, barbed harpoon that revolutionized whaling.

Whaling was a life-and-death business that required a meritocracy. At the time, Frederick Douglass opined that one allure of whaling was that the business allowed a black man “to be a MAN.” When you’re in a small boat being towed by a 160-ton behemoth, the skin color or language of the guy next to you was irrelevant.

It was a hard road to become a whaling captain, even more difficult for men of color in the mid-18th century in America, Finley notes. “One group stands out as an unintentional dynasty — all of them were born free, several were the progeny of slaves, some mixed by marriage to Native Americans. They were remarkably accomplished, and related by blood, marriage, and kinship.

Finley gives us the details of black whaling captains and crews. His book describes the lives and careers of Islanders: Cuffe, Belains, and Madisons, among others. In all, we have records of 52 men of color, with ships often crewed completely by men of color.

Finley’s work will make you think. Did the respect these men engendered at sea, and less often on land, contribute to the Island’s sense of community? Nationally, is our lack of knowledge of the vast contributions of people of color the result of an intentional whitewash of American history for centuries?

Read “Stony the Road” by Henry Louis (“Skip”) Gates Jr. (MV Times, Nov. 13) for an accounting of the post-Reconstruction national campaign to denigrate the black experience in America. Then look at MSNBC’s Chris Hayes’ “A Colony in a Nation” (MV Times, August 8, 2017) for a look at how that campaign worked on our racial perceptions over the past 100 years. Spoiler alert: It worked pretty damn well.

That’s changing slowly, as the accomplishments of people of color enter the mainstream in curricula, books, plays, and film. In recent years, we have come to know of the Tuskegee Airmen of World War II, and of the “Hidden Figures,” black women who pioneered in space travel science — microcosms of the whole.

There are countless records of those contributions across all disciplines, many lying in academic and historical archives.

The work by black Americans is available, rich, and knowable. For example, a 2017 (Jan. 27) Times interview with Oak Bluffs science doyenne Esther Hopkins directed me to lists of thousands of black American Hall of Famers across the entire scientific spectrum.

If we are now learning, or relearning, that we are all in this together, it makes sense that we should spend more time learning about our people. Finley’s work helps us do that.