Harold Hayden Sears, 84, of Falmouth, passed away unexpectedly yet peacefully on April 28, 2020. 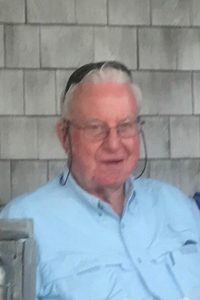 While summering in Falmouth, he met his future bride, who was also a summer resident. It was like a story of country boy meets city girl, and the rest was history. He will be joining his loving wife of 59 years Kristen Coakley Sears, who preceded him in death.

Born in Boston on July 8, 1935, Harold, or Kim, as many friends knew him, was the son of Harold Bright Sears and Olga Osterhout Sears. He spent his early years in Weston, and summers in Falmouth, where as a child he quickly fell in love with the Cape and Islands, the ocean, and particularly boats.

He found that school was not his interest, and at a young age left to go to work; shortly after, he started his own construction business. While establishing his business, raising a family, and summer camping and cruising on the boat in Falmouth in the 1960s, he found the growth of the Boston suburbs was bringing him closer to the ocean, where he felt most at home, and in 1968 moved to Falmouth permanently, where he could be down at the harbor working, playing, sleeping, or talking about boats.

Since he was never known to sit still, in 1970 his love for the Vineyard and friends brought him into new businesses on the Vineyard, which he maintained up to the day of his passing.

Kim’s love of the Cape and Islands, the ocean, boats, cruising from Northern Maine to the Gulf Coast of Florida, friends and family parties and reunions in Falmouth, and the Adirondacks were some of his greatest passions. His love of life, his entrepreneurial spirit, and the love of family, friends, and the people he worked with will always be remembered.

In addition to his wife, he was predeceased by his daughter, Wendy Ann Child. Kim is survived by his sisters, Anne (“Nancy”) Robbins and Olga (“Sandy”) Karplus; his son Clayton Sears; his grandchildren, Benjamin Sears, Taylor Devine, Lindsay Child, Jack Child, and Sam Child. He was a proud great-grandfather to Niamh and Ronan Devine. He is also survived by his best friend, Fred Testa, and longtime friend Barbara Fletcher.

A funeral service will be scheduled at a later date.

In lieu of flowers, please make donations to: Sail M.V. at sailmv.org/support-us/donate, or to Marine Biological Laboratory, at connect.mbl.edu/page.aspx?pid=298.