John E. MacKenty of Edgartown died on May 11, 2020, at his home on Wintucket Cove, at the age of 91. His passing was caused by complications from the melanoma that he had endured since 2010 with grace and dignity. 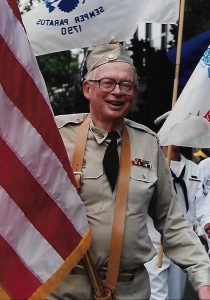 John was born in New York City in 1929, and grew up in Scarsdale, N.Y. Starting in 1937, his family spent summers on the Vineyard, and then moved there full-time in 1945. He graduated from Phillips Exeter Academy, Harvard College, and Harvard Law School, and later received a master of laws degree from New York University.

He was drafted into the U.S. Army from the Vineyard in September 1954, and served until August 1956. Stationed in Heidelberg, Germany, in early 1956, he met his future wife, Irene, who came from Indiana, and had joined the U.S. Civil Service to “see the world.” They married in Heidelberg in August 1956, and enjoyed over 60 years of a very happy marriage together, until Irene’s death on Dec. 30, 2016.

John and Irene moved to Scarsdale, N.Y., where they lived for 29 years and raised their three sons. Active in his community, he served as president of the Edgemont board of education, president of the Edgemont Neighborhood Association, and as a deacon and elder of the Greenville Community Reformed Church. In 1975 he was the recipient of the Greenville Association’s Silver Box award for outstanding community service.

Professionally, John enjoyed the practice of law for over 60 years, first in New York City and later in Edgartown, specializing in trusts and estates law. He was senior counsel to Davidson, Dawson & Clark in New York City for more than 30 years, and counsel to Worth & Norton in Edgartown from 1978. He was a past chairman of the trusts and estates law section of the New York State Bar Association, a fellow of the American College of Trusts and Estates Counsel, and a contributing author to books and studies on estate planning and administration matters. John’s quick mind and meticulous memory enabled him to continue to practice law until just last year.

Moving to the Vineyard in 1987, John and Irene enjoyed a large and diverse circle of friends, and loved living out on Edgartown Great Pond year-round. He always enjoyed the local wildlife, and continued his father’s tradition of duck hunting on the pond, teaching the sport to the next two generations of his family. Due to Irene’s work as a travel agent, they enjoyed numerous trips around the world with friends and family.

On the Vineyard, he was a founder, life trustee, and past president of the Martha’s Vineyard Preservation Trust, to which he and his siblings donated the Vincent House in 1977. He also served as chairman of the first Windemere board of directors, helped to found the Edgartown Area Ponds Advisory Committee, served on the boards of the Edgartown Pond Foundation, Wakeman Center, and Friends of the Council on Aging. He was an honorary life member and a past president of the Edgartown Reading Room, a member and a past trustee of the Edgartown Yacht Club and chair of its legal committee for many years. He enjoyed marching in the Fourth of July, Memorial Day, and Veterans Day parades for many years, until he was unable to participate.

John is survived by his and Irene’s three sons, John (wife, Huong) of Baltimore, Md., Michael (wife, Lisa) of Edgartown, and Edmund of Natick; and three grandchildren, Mary, Thomas, and Lily Irene. Besides Irene, he was predeceased by his parents, John and Katharine MacKenty, his brother, Jeremiah MacKenty, and his sister Katharine Bigelow.

A graveside service is planned at a later date. In lieu of flowers, contributions to the Irene C. and John E. MacKenty ’46 Observatory and Science Fund at Phillips Exeter Academy, Exeter, NH 03833, or the Endowment Fund of the Martha’s Vineyard Preservation Trust, P.O. Box 5227, Edgartown, MA 02539, would be appreciated.