Samuel Dexter Warriner II died peacefully at his home in West Palm Beach, Fla., on May 14, 2020, surrounded by his family. His death was due to complications from Parkinson’s disease. 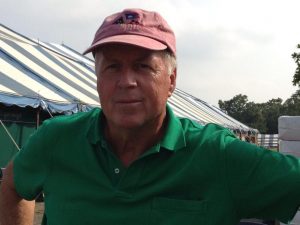 Born in Philadelphia on Oct. 22, 1941, he was the son of John Dorrance Warriner and Elizabeth Edgar Warriner. He spent his childhood years in Old Westbury, N.Y., and his summers on his grandparents’ farm in Montrose, Penn. Sam was a graduate of the Green Vale School in Glen Head, N.Y., and St Paul’s School in Concord, N.H., and he attended the University of Pennsylvania. A natural athlete and competitor, he played lacrosse, soccer, and varsity ice hockey throughout his academic years. Glee club and choir memberships were the foundations for his later love and appreciation of music. He enjoyed any opportunity to sing with his friends, not only knowing all the words but often additional verses as well.

Sam was predeceased by his first wife, Gail Louise Mapes, the mother of his son

Stephen (1962) and of his daughter Kimberly (1964). In 1968, he married Linda (Trimingham) in Bermuda, and their daughter, Alexandra, was born in 1972. Sam worked in the insurance business for several years, first in Philadelphia and later in New York City. While living in Syosset, N.Y., he was Hood Sailmakers’ representative for Long Island Sound, where he fine-tuned his appreciation of all aspects of the boating world. In 1975, he and his family moved to Edgartown, and became year-round residents for over 30 years before later spending the winter months in Florida. During his Vineyard years, Sam was the owner and proprietor of two prominent restaurants, the Dunes and Warriners. He was known by many guests and friends as a wine connoisseur and the ultimate host of fine dining establishments.

Sam was a former member of Seawanhaka Corinthian Yacht Club and the New York Yacht Club. He was also a longtime member of the Edgartown Yacht Club, where he served as the chairman of the race committee, of the nominating committee, and as commodore. Along with his fellow sailors, he especially enjoyed being at the helm of his boat, High Tide, navigating Vineyard waters and beyond, as both an avid cruiser and competitor. He traveled many nautical miles in local waters, on the Intracoastal Waterway, the Caribbean, and on the high seas in offshore races.

Sam was a gentleman, patient teacher, family man, and loyal friend, with a smile and a steady quiet way which endeared him to many.

Sam is survived by his wife of 52 years, Linda; his three children, Stephen (Kristin), Kimberly (David), and Alexandra; two granddaughters, Courtney and Emily; and by his sisters, Elizabeth and Sarah Warriner, and brother, John Warriner.

Burial will be private in Edgartown. Plans for a celebration of life will be announced at a later date.

In lieu of flowers, donations in his memory may be made to Sail MV, sailmv.org and the Parkinson’s Foundation, parkinson.org.