Neil Ames Welch Jr., known by many as Apple, passed away Wednesday evening, May 20, 2020, at Tobey Hospital after a brief and ferocious battle with coronavirus. 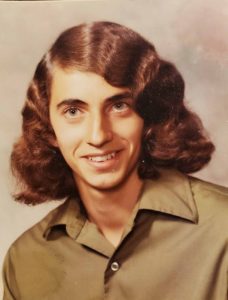 Neil was born Oct. 5, 1956, at the Martha’s Vineyard Hospital in Oak Bluffs. As a child, most days were spent with cousins and friends. Neil enjoyed family cookouts and baseball games, large holiday dinners, and playing Little League baseball and basketball with friends. High school brought many more friends, which is when he got his nickname, Apple.

Two major accidents, 40 years apart, altered Neil’s life. He remained living with our mom, Gladys Welch, until October 2016, later moving into his home in Wareham. Over the years living at home, Neil had many jobs. He raked leaves for the Camp Meeting Association, mowed lawns, filled in on jobs where needed, and most steadily with Gene Bergeron. Neil also would answer the call from people in the neighborhood to rake, help move something, or just about anything asked of him.

Neil liked to cook and bake. He would make kale soup and never eat it, he just liked to make it; he would bake cheesecakes, brownies, and cakes. It wasn’t unusual to see Neil riding his bicycle with a cake carrier balanced on the handlebars, delivering his baked goods. Gene and Bev were often the happy recipients. A childhood friend shared a story recently of when he lost his mom 10 years ago. As he was sitting at the kitchen table after the service, there was a knock on the door. Neil had walked over with an apple pie he had made. They sat and ate and reminisced about the old days. Neil always had time to help and comfort a friend.

A great sense of humor got us through long waits at the doctor’s office. While waiting for the doctor or nurse, he’d say to me and my mom, “Come on Henry or come on Gertrude, I’ve got places to go.” We never came across a doctor or nurse with those names, but for some reason they worked for him. We’d play cards to pass the time, giving each other a sideways glance and a smirk waiting for my mom to take her turn. When Neil was in the hospital, his nurse would ask him if he needed anything before she left the room and he’d say, “Yes, I want you to take a break and buy a cup of coffee, I’ll buy.” He loved to flirt, and did it well.

When talking with people since Neil passed, I frequently hear what a raw deal he got in life. I’ve said it myself at times. In hindsight, it’s true, Neil had many struggles that he persevered through, but it was his life. He never complained, he always had a kind word and a smile, and took great joy in being helpful to others. I believe a full life is not measured by the number of years you live, but by the number of hearts you touch, the number of people who when they think of you, a smile and a story come to mind. To Neil, it’s just the way it was, and he was who he was, a great guy with kind eyes and a big heart.

Neil was predeceased by his father, Neil Ames Welch Sr. He is survived by his mother, Gladys Combra Welch; his brother Darren Welch and his wife Amanda, and his sister Diane Welch and her sons Nathan Costa and Matthew Look; aunts, uncles, numerous cousins and their families. Family names Combra and deBettencourt say it all.

We would like to thank those who took care of Neil in recent years, doctors, nurses, and caregivers. Dr. Seth Herman, formerly of Spaulding Rehab in Charlestown, and Katelyn Eagen, coordinator for Cooperative Productions, and staff where Neil lived, freely gave kindness, understanding, support, advocacy, and care for Neil and our family. We appreciate all who have cared for, prayed for, and loved Neil over the years. He will be greatly missed and never forgotten.

There will be a private service followed by a celebration of life in the fall. Donations in Neil’s honor can be made to the Brain Injury Association of Massachusetts (BIA-MA), 30 Lyman Str., Suite 10, Westborough, MA 01581, and the Portuguese-American (P.A.) Club, P.O. Box 2203, Oak Bluffs, MA 02575.