It’s been pretty clear that the COVID-19 pandemic decimated Island businesses over the past three months, and has left business owners wondering what the next three months will bring.

Now a survey by the Martha’s Vineyard Commission backs up those assertions.

The survey results, released June 8, show Island businesses have had sharp decreases in sales or have been forced to close, employees have been laid off, and some have struggled to get the federal assistance offered through the CARES Act.

There were 179 businesses that responded to the survey, which included restaurants, accommodations, construction, and retail establishments. A majority of the businesses surveyed (62 percent) are year-round businesses and 62 percent of them reported they own their own office space.

According to the results, 71 percent of the businesses surveyed expect the pandemic to have a “severely negative impact” on their business. Another 18 percent expect a “somewhat negative impact.” Less than 10 percent of those surveyed believe COVID-19 will have mild to no impact on the Island economy.

Here are some other highlights from the results:

Christine Flynn, economic development and affordable housing planner for the MVC, was not immediately available for comment on the survey.

Some of the survey comments showed the frustration of business owners over federal assistance. “I might be forced to close my business that I have put all my sweat and tears [into] for the last 10 years,” one business owner wrote, noting that the Payroll Protection Program [PPP] loan provided enough to stay afloat for only one month.

“No, there is simply not enough relief available to manage through these tough times,” another wrote. “My business is currently losing $20K per month, and still having to pay for business insurance.”

Other survey responses read like the comment section of an MV Times story, with commenters turning to partisan politics about the pandemic — one commenter using President Trump’s term for COVID-19, the “Chinese virus,” and another saying that “unbiased fact/truths” are needed about the situation. “Time to grow up and put aside the blame game,” the person wrote.

One commenter put the situation bluntly. “If [the] state/towns do not allow businesses to open fully without occupancy reductions in time for the summer season — Memorial Day weekend — Cape Cod and the Islands will be absolutely destroyed,” the unidentified business owner wrote. “We only [have] three months to make a living that has to sustain our families for the year. Without it, we will see everything from business closures to bankruptcies, to plummeting real estate values. The whole region will be destroyed.” 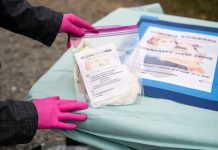 So sad. Maybe a CVS? Have to wait and see what happens. Gonna miss going there tho

Major loss to the community! Their service was paralleled by few!

So sad, they have been there forever