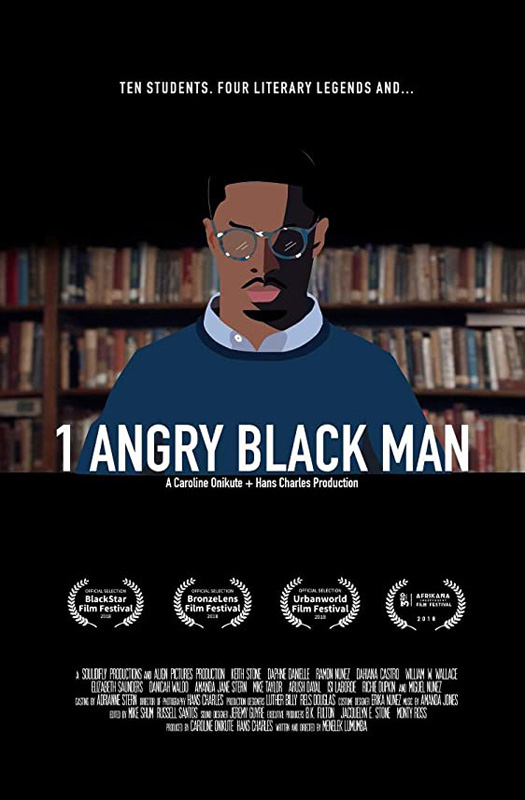 Mike, played by Keith Stone, is a senior from Chicago, eight weeks away from graduation. The film establishes its focus on Mike by opening with his police interrogation. They have accused him of sexual assault, when he actually walked home the drunken female classmate involved. He’s abruptly released, but the trauma of Mike’s arrest sticks with him.

Daphne Danielle plays Carla, the class’s professor. “1 Angry Black Man” is in many ways like Sidney Lumet’s 1957 courtroom classic, “12 Angry Men.” After Mike’s arrest, “1 Angry Black Man” stays in the classroom. It depends on pans and close-ups, as the students talk over the books they’ve been assigned to read. Like a play, the movie has three acts, with breaks in between. Half the students are black/brown, half white, with a mix of ethnicity and socioeconomic status. Subjects discussed range from race and gender to sexuality and politics.

Mike gives a presentation on James Baldwin’s “The Fire Next Time.” “Screw Baldwin’s optimism,” he says. Next come talks about Zora Neale Hurston, known for “Their Eyes Were Watching God,” and August Wilson, author of a 10-play series including “Fences.” Hurston’s femininity is praised by Michelle (Dahiana Castro), a Cuban lesbian. Kyle (William W. Wallace) is the outspoken resident conservative. Ironically, he’s a good friend of Mike’s. Ellen (Elizabeth Saunders) is the class’s white, middle-aged mother of a biracial son.

During one break, Carla asks Mike if he’s seen the therapist she recommended. He hasn’t, but the exchange suggests her concern. “Never let the worst of your life rule yourself,” she tells him. It is an example of how everyone shares elements of their personal lives. Mike hasn’t talked to his brother since his younger brother died. Freshman Kendra (Isi Laborde-Edozien), Mike’s potential girlfriend, kisses him at one point. “I grew up with so much privilege,” confesses white student Maggie (Amanda Jane Stern).

The discussion in “1 Angry Black Man” goes beyond the books read and personal revelations to look at broader issues, like whether a radical rapper should speak on campus. “You can’t protest an idea, just counter it,” Carla tells her students. “The world is a sharp place.”

“1 Angry Black Man” ends with a period of meditation in which each student offers final thoughts. With much of the country demonstrating against racism and police violence, here is a film where the young people who will dominate the future explore those issues.