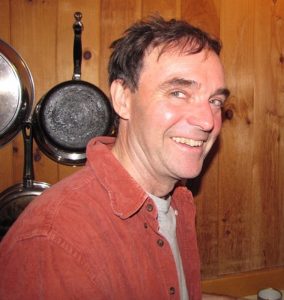 Sully was born in 1951 in Cambridge to William and Kathleen Sullivan, and was the youngest of three children.

After the early death of Sully’s mother and older brother William, Bill Goldsmith, a concerned teacher, stepped in to act as the two surviving siblings’ guardian, and remained a part of their lives until his death.“Goldie” ushered these two kids from East Cambridge to great opportunities. Sully attended the progressive Cambridge School of Weston for high school, and even a bit of Brandeis University, until he blazed his own trail to hands-on education for housebuilding and design. He spent his early years exploring communal living and farmsteading in various locations in Massachusetts. He studied passive solar design and energy solutions. Sully arrived on Martha’s Vineyard in 1976 with his close friend Mark Hurwitz to build a house for Bill Goldsmith, and never left. In the early 1980s, he built his own passive solar house. At the time, he had partnered with his friend Jay Walsh to sell solar hot-water heaters. His own still works after 35 years on his roof! He was involved with the construction of Anna Edey’s Solviva greenhouse, and with the conversion of an antique barn into the Bodhi Path Meditation Hall. He also built houses on his own or with the Hurwitz crew.

Sully was part of the Energy Resource Group from 1979 to 1981, and served on the Martha’s Vineyard Commission for eight years in the ’90s. He believed in speaking up for his principles. He had immense curiosity, and was always learning, was concerned with energy use and the health of the planet, its peoples, and creatures. He was a walking Wikipedia, from world political history to ancient civilization, to the names of all the band members in the music of decades past. He was frequently humming and singing in a sonorous voice — he loved a wide variety of music.

Sully found yoga, meditation, and a spiritual lifestyle a healing modality to his early losses, and continued to integrate these into his life to the end. He took great enjoyment in the simple pleasures of the seasons unfolding and the company of his friends. He had a gentle demeanor and a dry Celtic wit.

He was predeceased by his mother Kathleen, brother William, and his father William. He is survived by his wife Linda Ziegler, sister Gail, niece Jennifer, and nephew Louis. A celebration of his life is planned in the fall.