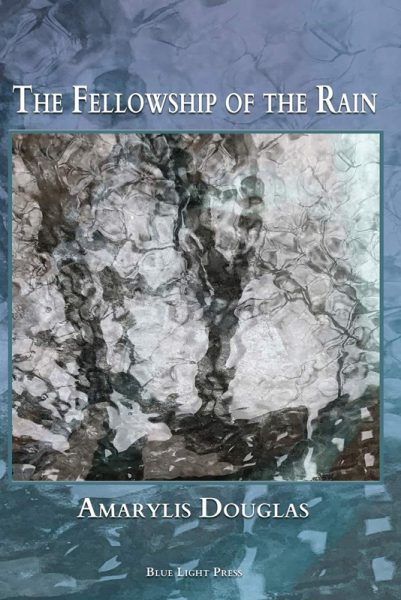 Dripping from an overhang, seeping down someone’s back, or turning a sleeping bag into a sponge, the rain in Portland, Ore., is constant, always in the foreground and background. In this first book of poetry by Amarylis Douglas, “The Fellowship of the Rain,” pain and dampness soak through every page.

Douglas observes homeless people in Portland, but she does so much more. She imagines their lives, recognizes each as an individual, and describes them from multiple perspectives. Some of her poems are vignettes describing sadness and desperation, but others recognize that humans take on meaningful roles no matter the situation.

Everyone has a story. The people inhabiting these poems are young, old, vets, chronically homeless, and those new to the scene. Douglas’ narrative poems paint street scenes of characters alone or in groups, sometimes just hanging out, at other times playing music or dancing. Many are looking for a handout.

After the stage is set, she opens the personal history, and subtly explains how they became homeless. Past and present are combined in most narratives. Although the memoirs are of the author’s making, the descriptions of tragedies in these lives are familiar. Most have experienced domestic violence, sexual abuse, drug addiction, or mental illness. Many have suffered multiple traumas. In “The Split Rail Fence,” a boy who is sleeping in a doorway tries to fall asleep with his eyes open. The poem tells about his mother who loves him, but doesn’t try to call anymore out of frustration of trying and not being able to contact him. She is happily remarried, but her son’s memory haunts her. In a similar vein, “Her Silhouette” tells of a mother who sees her homeless son on the street. He does not recognize her. She laments, “You were a little boy snuggled up beneath your mother’s silhouette. She held you in her lap. You smelled her heart.”

Douglas uses everyday language to chronicle her tales. When the setting requires it, she leans into the rhythm and becomes more colorful. “Jazzy” tells of a dark lounge where jazz is played inside while outside on the corner, “November soul man pours his heart into his old sax” and “the stars begin to sway.”

Her use of metaphor is balanced and compelling. “Under the Halo” describes the pride of a young homeless man who takes care of his few belongings and works hard to stay out of trouble. At the end he is sitting under the halo of a street light, making him saintly and signaling his goodness. In “You Wait,” a man holds a sign “Homeless. Anything helps,” near a crowd waiting to buy ice cream and ignoring the man. Douglas portrays him as a tree in the forest of strangers, “this deciduous crowd.”

Social justice is inseparable from issues of homelessness. The poem “Christmas Eve” contrasts the Willamette Valley, “where houses full of glass hang off the sides of mossy cliffs, where some people live in luxury,” with Portland where “too many others, down below, push cold metal shopping carts, filled with their own stories … and sleep in the middle of the street.” In the poem “Justice,” every stanza begins with the word just. “Just another home built in a doorway; Just another kid in between his drug dreams; Just two young sisters on the road; Just another mother sitting on a blanket holding her baby Jesus on her lap.” Douglas is gentle with her outcries, but hits a nerve of outrage and an argument for reforms.

Douglas became familiar with the homeless in Portland when she lived there for several years, and also during frequent visits to family there. She now lives on Martha’s Vineyard, where she was a teacher at the Edgartown School before retiring. She is also a member of the Martha’s Vineyard Poets Collective. The poems in this book were written over four years. Notable themes woven throughout the collection are humiliation, despair, and yes — hope and grace.

“Bumps” illustrates homeless mounds of “single … or multi-shaped, family bumps, pieces of insulation, humiliation sticking out the side … sometimes a neighboring bump, or two, homes for the night, the new American landscape.” In “This Night,” Douglas witnesses “families of children washed in the same gray-green city mud that you know the smell of, children camped on the corners of the day, thieving violators of the night …”

Douglas sees through the pain in “Handsome” as she sketches a figure in “Black wool topcoat, black knit cap, thick silver curls cut crisp, stylish, handsome, spilling words in spasms, to everyone, anyone, no one …” A young man crawled out of his sleeping bag as the author observed him while she was sitting at a red light, inspiring the poem “Down Burnside.” “You sit and eat some crackers, breakfast. A son, my son, your son, new to the streets, maybe his first night, brand new sleeping bag, could have been a Christmas present.”

In the middle of the poem, “The Conductor,” Douglas italicizes “There are so many men of passion who walk around the city.” She takes time to notice and appreciate these instances. The conductor “directed an invisible orchestra, a symphony of pleasure … I watched his glory, his pride, his moment of splendor …”

The author’s understanding is complex. She portrays a person alone with his backpack and dog, under a city bridge in “Hope.” “His hands are still soft with naïveté, eyes still wide with fear, memories still nightmares.” Her message to him is, “Maybe there are friends set up under this same bridge. Maybe they would welcome you to sleep beside their fire. Maybe they would listen, if you could start to tell them.”

We’ve all seen homeless people; been uncomfortable near them, uncertain how to react. Douglas sees them as human biographies, stars of the streetlight, wandering musicians. She recognizes their feelings and sees the poetry in them. This book will teach you the individuality of homeless people. It will open your heart and change your mind.

“The Fellowship of the Rain” is published by Blue Light Press, and is available at the Edgartown Bookstore, Bunch of Grapes Bookstore, Cronig’s Market, and online.