Former Gov. Stephen Everett Merrill, 74, passed away at his home on Sept. 5, 2020, surrounded by his loved ones. 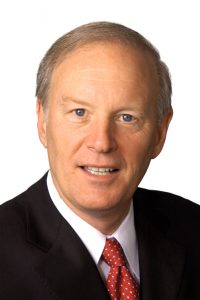 After completing his legal studies in 1972 at Georgetown University, where he edited the law journal, he entered active military service, and was named legal counsel to the Secretary of the U.S. Air Force, attaining the rank of captain.

He then returned to his beloved home state in 1976, and became a partner at Devine, Millimet, Stahl and Branch, where he was a trial lawyer. His entry to politics came as legal counsel and then chief of staff for Gov. John H. Sununu. Sununu appointed Merrill New Hampshire’s 22nd attorney general in 1985, where he served with distinction for four years. He then returned to private practice in Manchester with his friend and colleague, John T. Broderick Jr. The Merrill and Broderick firm specialized in trial work.

Citing his young family, he declined to seek a third term, and instead returned to private practice with the national law firm of Bingham, Dana and Gould (later Bingham McCutchen) in Boston, and was chairman of Bingham Consulting.

The family includes his wife, Heather; two sons, Ian Merrill of Durham, and Stephen Merrill and his wife Karissa of Miami, Fla.; his brother Robert Merrill and family live in South Carolina. Stephen will be remembered with love and cherished by all who had the pleasure to know him, his intellect, and sense of humor.

Donations in his memory may be made to Samaritan’s Purse, PO Box 3000, Boone, NC 28607, or online at samaritanspurse.org.