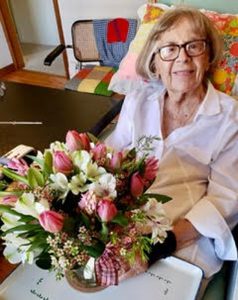 Born in New York City, Sam grew up in the Depression, but said she was largely immune because her parents ran a kosher chicken shop in Bayonne, N.J. In addition to gaining a lifelong aversion to chicken, she gained the nickname “Chickie” all through her teenage and NYU college years.

She never really liked her given name Shirley, and at some point in the 1970s decided that she was in fact “Samantha.” Following the plotline in “Miracle on 34th Street,” she mailed a letter to Samantha Drogin at her home address, and when the postman duly delivered it, she proclaimed that the U.S. government had recognized her as Samantha, and That Was That. She was Samantha, or Sam, ever after.

It proved what anyone who met her learned quickly: Samantha Drogin knew how to get her way.

She became a WWII bride at age 22, marrying Capt. Morris Drogin when he had returned from the war in Europe and was about to ship out for the planned invasion of Japan. In peacetime, they settled down in Bayonne, where Morris practiced law and was president of a family-owned bus company. Samantha managed her husband and their four children in a noisy home full of books, newspapers, and spirited dinner table discussions. She and Morris came to the Vineyard for the first time in 1970 or so, and fell for it hard. They bought a summer house a few years later in Kitts Field, then on the outer fringes of Edgartown, long before development spilled down to the ocean. She happily spent more than 45 summers here, enjoying the lobster rolls, the art galleries, and the rhythms of Island life.

She was the first person she knew to buy a Cuisinart, and to foist ratatouille on her carnivorous and unappreciative family. She was the sort of mother who pulled her kids out of school to take them to New York City to watch a new Hitchcock film, a Charlie Chaplin revival, or a Broadway show. They grew up believing that a Marx Brothers film was better education than a class on polynomials.

Though she lived the first half of her life in Bayonne and the rest in Fort Lee, Sam always considered herself a New Yorker at heart. She read the New Yorker cover to cover, solved the NYT Sunday crossword puzzle in ink, and was addicted to the Metropolitan Opera and Broadway shows. “I’m happiest when I’m at a museum,” she would say, leading her family on forced marches past the sarcophagi and Greek urns.

There was always a book or three within reach, with tastes that ran from Anthony Trollope to Agatha Christie. As often as not, she would clip articles out of the paper, annotate them heavily, and mail them to her family or friends. She taught high school English when she was younger, and all her life remained a stern grammarian and passionate disciple of the OED, to the point that she once wrote a harsh letter to the editor of the Times to correct its usage of the word “assegai.” She was right, as always, and they meekly printed the letter. She took no prisoners in Scrabble, and continued to beat us all in gin rummy until the onset of the pandemic, when we could no longer sit at the same table.

Samantha was drawn to fine things — iconic Frank Lloyd Wright architecture, Cartier and Tiffany bracelets, mimosas at the hushed members’ dining room of the Metropolitan Museum of Art, and in summer, lunch at the preppy Vineyard Golf Club. But she was also a faithful fan of yard sales, secondhand vintage shops, and in her last years of life, paperback thrillers and “Monk” reruns. She clothed herself in Pucci and Gucci in her heyday, and in later life switched to what she called her “uniform” — a white cotton blouse tucked into beige trousers, jazzed up with a pair of leopard-patterned loafers or mules from an Imeldific collection, with smart fedoras in the winter and classic woven toppers in the summer. Samantha was what another generation knew as a classy dame.

After Morris passed away when he was 64 and she was 61, Sam never remarried. Over time, she plunged herself into the role she became best at: being a grandmother. She wasn’t the kind who baked cookies or knitted mittens. She was the kind who took each of her grandkids separately on Shakespeare and Harry Potter tours in England or gastronomic tours in France, who passed on her delight with Dickens, Calder, and the black-and-white antics of Buster Keaton.

Though she lived in another state, Grandma was a constant loving presence for Casey and Caroline, and for Michael and Sammy. As the world shut down, the highlight of her pandemic day was a video call with baby Andrew, her only great-grandchild. And in the blighted summer and fall, Caroline got to spend a lot of time with her grandma here on Martha’s Vineyard, their love humming across a safe distance of several feet, al fresco.

A few days ago, her heart softly fluttering in her chest like a butterfly, Sam became too weak to get out of bed. In the early hours of Nov. 13, her nurse aide, who was sleeping in the same room, dreamed of a man by Sam’s bed, and woke up knowing that Morris had come for his bride. Samantha died a few hours later. She left as she had always wanted — in her own bed, in her sleep, her final days spent with her family telling her how much they loved her and hearing her tell them how much she loved them.

One last time, as always, Samantha Drogin got her way.

Her memory is a blessing to all who knew her.