In Massachusetts, 16,358 residents died in the Spanish flu pandemic of 1918, according to the official figures of the time. Twelve of them were from Martha’s Vineyard. But both numbers were undercounts. The best modern estimates bring the statewide toll well north of 20,000, and a close examination of the Island’s death records show at least 19 deaths attributed to this deadly virus during those tragic years, plus another 11 young people, at minimum, claimed by forms of pneumonia closely associated with complications of this flu.

Mrs. Mary (Cleveland) Luce of West Tisbury, 60-year-old wife of trap fisherman George Luce, may have been the first Island victim of the deadly new strain of flu in May 1918. How this plague arrived on the Island, or how she contracted it, is unknown. (Her son-in-law, Walter Vincent of West Tisbury, age 45, would succumb to the same virus seven months later.)

The wave that claimed Mrs. Luce was a relatively mild one. But then a second, much larger and much deadlier surge hit the Island, as it did most of the country, in September 1918. Now known as the H1N1 influenza A virus (a milder strain of which caused the far less severe 2009 swine flu pandemic), its initial symptoms were typical of any common flu: sore throat, headache, and fever. However, this potent strain was often followed by pneumonia, hemorrhaging, and in more than 2.5 percent of cases, death.

The Fall River Globe published the warning signs of the new flu in a September 1918 issue: “The disease is characterized by a sudden onset. There is a chill, then fever with a temperature from 101 to 103, headache, backache, reddening and running of the eyes, pains and aches all over the body, and general prostration. Persons so attacked should go to their homes at once, get into bed without delay, and immediately call a physician.”

Robert Smalley was the first Islander to die in the second wave, and the only Vineyard victim to explicitly die of the “Spanish” flu in the town records. (This was a misnomer; the first appearance of the virus was in Kansas.) Smalley, a 20-year-old Wampanoag man from Gay Head, worked as an apprentice mason and fisherman. His father Jesse was a surfman for the U.S. Life-Saving Service.

Mrs. Clara (Rheno) Tennis died of “broncho pneumonia following influenza” the day after Smalley. A 25-year-old Vineyard Haven nurse who had gotten married less than three weeks earlier, Mrs. Tennis had just returned from her honeymoon when she fell ill and perished. Her brother, Walter Rheno of Vineyard Haven, died of the same disease — what the French called the “grippe” — three weeks later and 3,500 miles away on the front lines in France. He was the Vineyard’s first pilot, and was renowned for his prowess in shooting down German planes during the war.

Because bacterial pneumonia often struck the final blow in Spanish flu victims, the death records are sometimes masked by other causes. Clinton Hart, a 19-year-old of Edgartown, who died of “bronchial pneumonia”; 30-year-old Scottish sailor John McInnis, who died of “lobar pneumonia” at the Marine Hospital; and New York City retiree Harriet Van Woert, who died of the same cause in Vineyard Haven, may all have in fact been victims of the flu.

Daniel (“Blind Dan”) Pierce died of the flu in Edgartown in October 1918. A 65-year-old street peddler of “notions” (likely souvenirs and snacks), he had been blind since childhood. At one time a regular feature on the train from Cottage City to Katama, Pierce is sometimes remembered as Edgartown’s last town crier.

Wendell Ripley of Edgartown, 21-year-old assistant purser of the steamer Uncatena, died in December as well. A graduate of the Edgartown High School class of 1916, he fell ill with the flu while at work aboard the steamer.

Three Edgartown men died of the deadly flu on a single day: Dec. 17, 1918, the nadir of the Island’s epidemic: Gerald Pease, Bert Lambert, and Frank Howard.

Howard, 38, was an Edgartown laborer. Lambert, 36, worked as a chauffeur and managed his brother-in-law’s livery stable and garage in Edgartown. Lambert’s niece Beatrice would soon die from the epidemic, and her sister Marjorie became seriously ill from the flu as well. (Her grandson, Ben Hall Jr. of Edgartown, writes, “My grandmother’s lungs were weakened for life by that flu.”)

Pease, 33, was our registrar of deeds. He had also served as an Edgartown selectman, town clerk, assessor, and overseer of the poor — a remarkable, if all-too-short, career. In his capacity as registrar he had recently signed the wartime draft registration cards of Ripley and Lambert, both of whom died within days of Pease.

Seven-year-old Marcia Chadwick of Brooklyn was visiting her uncle, Vineyard Haven dentist Dr. Edwin Thompson, and perhaps hoping to escape the raging epidemic in the city, when she was stricken with the deadly flu. She is buried in Oak Grove Cemetery.

The flu closed Vineyard schools twice for a total of 11 weeks; theaters were shuttered, gatherings canceled. People were urged to get outside into the fresh air.

A third, much milder, wave of the virus swept through parts of the country in the spring of 1919. Its victims included Bertha Dolphin, 22, of Vineyard Haven, a second-generation Cape Verdean woman with two young children. (Her sister Mary Isaacs took them in, but then lost her own husband mysteriously in 1923.)

Frank Eddy, 34, of Vineyard Haven, was perhaps the last local victim of this tragic pandemic. The manager of the local telephone exchange, he worked in the building now occupied by Rainy Day until his untimely death in early 1920.

The so-called Spanish flu was not the Vineyard’s first deadly plague, but the epidemic has largely faded from living memory, even as COVID’s statewide death toll begins to approach the grim numbers of 1918.

New York health agencies distributed a simple couplet which was widely distributed for years afterward; it became the unofficial jingle of 1918:

“Cover up each cough and sneeze;
If you don’t you’ll spread disease.” 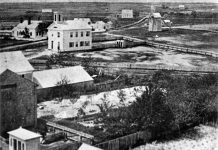 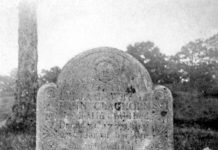 This Was Then: Lost graves of Martha’s Vineyard 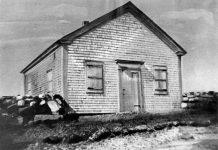 This Was Then: Woodpecker Hall

Happening at the Vineyard Haven library