It poured on Saturday afternoon, a drenching, wild, and windy rainstorm. A nor’easter. Our lights flickered off and on a few times, but mostly stayed on, lucky since I was baking Christmas cookies at the time. It turned out to be a good day for staying inside. Even Abby thought so; she stood at the door looking at the rain sheeting off the roof and wouldn’t put a delicate paw out until it finally slowed and stopped.

The rainy afternoon was also good for catching up on reading from the pile of newspapers that tends to collect in a corner of our living room. One story that caught my attention was Geoff Currier’s interview with Mal Jones from last week’s Martha’s Vineyard Times. Mal had come up with the idea of building a submarine and accomplished the task using mostly scavenged and repurposed components from the dump. If you haven’t read it, please do. It is a wonderful conversation with a man whose agile and curious mind looked for possibilities, an inventor of what hasn’t yet been, of what could be. It was also a reminder of life as it was in West Tisbury.

Just the word “dump” conjures up happy memories for me. When I was growing up in Connecticut and after I moved to the Vineyard, dumps were repositories for plenty of used goods that people left to the side for someone else to take. It was the original recycling. Back in the ‘70s and 80s it was commonplace to check what was available whenever you went to the dump on Sunday morning. It was a joke that you were likely to come home with more than you left with.

Many of us built our houses using recycled windows or doors or other discarded construction materials. Used sinks, tools, tires, truck or car parts, oriental rugs, antique chairs, boxes of jazz records, parts for a dishwasher, old lawn mowers that still worked or could be repaired, a myriad of opportunities for a dogged dump-picker. I knew people who furnished their houses with perfectly good things they found at the dump. What was the old New England saying? “Use it up, wear it out, something something, or do without.” Was it “patch it up”? Or fix it up? It was perfectly logical to assume that someone could build a submarine out of parts scrounged from the dump. In fact, when one of our family members built their guest house, we affectionately called it “scrounge lounge,” a moniker that persists to this day.

I really miss those times. Most of us had stories of possibly someday useful stuff, just in case. We built our houses in stages as we could afford to, replaced parts, or added on in time. There were fewer of us, certainly, and nobody minded what their neighbors had stashed in their yards. Rez Williams gave it some colorful description that he made up, how West Tisbury was. I have forgotten now, and don’t want to disturb Rez to ask him about it. I tend to write in the middle of the night. There were fewer rules, and disputes were usually settled between neighbors, rather than having zoning laws that anticipated problems. It was hard even then to afford to buy a piece of land and to build a house. We made due.

The West Tisbury Selectmen would like to invite people in the community to a brief holiday gathering via Zoom. For more information, visit bit.ly/towngather. Don’t forget the First Congregational Church of West Tisbury will hold its Christmas Faire this Saturday, Dec. 12, from 9:30 am to 2:30 pm. Handmade wreaths, table arrangements, cards, and raffle tickets will all be there, as usual. There are protocols for mask-wearing and distancing inside the church.

If you have any West Tisbury Town Column suggestions, email Hermine Hull, hermine.hull@gmail.com. 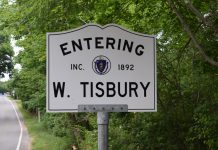