Ann Boyer of Chilmark, Massachusetts, died of metastatic cancer at Martha’s Vineyard Hospital on the afternoon of December 15, 2020. She was 84 years old. Her husband Everett Spees was at her bedside, and their children and grandchildren were present during her final days thanks to videos and telephone links. 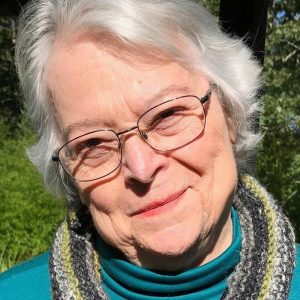 Ann was born to Martha and Paul Boyer in 1936. Ann’s parents built a house on Blacksmith Valley Road in Chilmark in 1946, after her father returned from wartime duty as a U.S. Navy physician on a hospital ship. The family enjoyed returning to the delights of the island community every summer.

She attended Kent Place School in Summit, New Jersey, and received a bachelor’s degree at Middlebury and a master’s degree at Middlebury Breadloaf School of English. She taught English at the Roycemore School in Evanston, Illinois, prior to her first marriage to Larry Palmer Scriggins. She had two children, Lee and Tom, and taught at St. Timothy’s School before returning to graduate school. In 1976 she received a master’s degree in Social Work, from the University of Maryland in Baltimore, after which she was employed as a social worker at Shepherd-Pratt Institute in Baltimore while completing two years of evening training at the Washington-Baltimore Center for Psychoanalysis.

In 1978 she married Everett Spees, a transplant surgeon with three children, who had joined the Johns Hopkins faculty after retiring from the Army medical corps at Walter Reed. They had a son, Ben.

Ann was in a private therapy practice specializing in eating disorders. These disorders of  children and young adults are often life-threatening and are among the most difficult cases for management. Their treatment requires a therapist with great knowledge, insight, patience, and courage. Not only the sufferer, but her family requires therapy.

In 1982 Ann, Everett, and Ben moved to Denver when Everett was recruited to start a transplant program at Presbyterian-St. Luke’s Hospital and later to also head the transplant program at the University of Colorado Medical Center. There, Ann served at first for several years as a social worker therapist in the Denver Children’s Hospital acute psychiatric unit, managing seriously disturbed and sometimes dangerous children and their distressed families.  Ann was respected for her high level of competence, commitment, and compassion. Although Everett’s long and unpredictable hours were also stressful, Ann enjoyed several overseas trips for transplant meetings as well as one social work trip to Wales. After 9/11 Everett was recalled to active Army duty from retirement four times, adding up to two years. Ann was able to join him only on the last deployment, an unforgettable seven months in 2008-9 at Tripler Army Hospital in Honolulu. In 2015 Ann and Everett moved full time to their house in Chilmark.

Ann was a knitter, designer, and builder, an avid reader, writer, and sometimes poet. Always a teacher, she loved to help others with writing and editing. She waited for the delivery of each issue of the New Yorker and enjoyed books, including those recommended by her Mom, Lee, and friends. She loved the island and islanders and had a seemingly encyclopedic recall of family names and relationships. She was a good listener who made lasting friends effortlessly with her authentic interest and sincerity toward others. She had a passionate and inquisitive spirit, delving deeply into intellectual and spiritual exploration throughout her life.

Ann was active in the Buddhist community on the Island, and online. Lama Karma Rinchen, her Tibetan teacher in Honolulu, provided invaluable distance mentoring.

Ann was predeceased by her parents, Martha Slayton and Paul K. Boyer, and by son Tom Scriggins. She is survived by her husband Everett Spees; two brothers, Paul S. Boyer, and Bruce Boyer; her step-daughter Sally Langlois and her husband Raoul; her step-sons Everett III and Robert Spees; her daughter Lee Scriggins and her spouse Michell Irving; her son Ben Spees and his partner Sabrina Gogol; her granddaughter Natasha Punj and her husband Varun; and her granddaughters Lucy and Destiny Scriggins.

The marvelous nurses and medical staff of the hospital and of both Hospice of Martha’s Vineyard, and the Visiting Nurses Association of Cape Cod Hospice, as well as the staff of the Tri-Town Ambulance, provided her with continuity compassion care. Ann’s funeral was on December 18th at Abel’s Hill Cemetery in Chilmark. Jill De la Hunt, an ordained Buddhist chaplain, conducted the green burial service with Tibetan Buddhist liturgy, in collaboration with Ann’s Lamas in Hawaii and Chas DiCapua of the Island Insight Meditation Community.

Contributions may be made to the Island Insight Meditation Community, chasd@dharma.org.