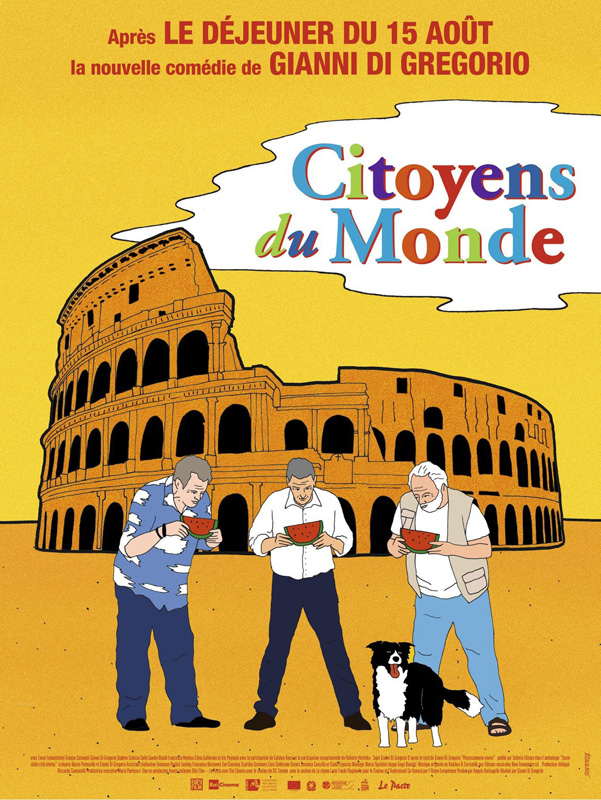 “Citizens of the World,” an Italian comedy about three 70something retirees and their plans for the future, is playing virtually at the M.V. Film Center. This charming, low-key film begins at the Film Center on Friday, Dec. 18, and consists of the conversations among the retirees about their plans to move abroad.

The film starts out with discussions between Giorgetto (Giorgio Colangeli) and “il Professore,”” (Gianni di Gregorio, also the director), a former classics teacher. They chat away about their evolving efforts to move to a country where the cost of living will better stretch their meager incomes. Soon they explore the ins and outs of moving. That includes passports and accident insurance. A trip to the passport agency is unsuccessful when the clerk drops down the blind, closing shop. In hopes of winning, Giorgietto buys a scratch-off card, which, of course, produces nothing but sets up a later ridiculous episode. Each incident seems to conclude with a cheerful glass of wine or grappa.

The viewer watches as one man helps himself to soup in his apartment’s kitchen, and yet gives another man a bag of hard-boiled eggs. The men decide to visit antiques dealer Attilio (Ennio Fantastichini) in Santo Domingo, outside Rome. They get off the bus they’ve taken, but seem clueless about where they’ve landed. It’s part of the silliness of these men, who often seem confused but manage to carry on.

They find the villa that is their destination, and Attilio invites them in for a bottle of beer, then some pizza. Attilio shows them his collection of secondhand items, and later they help deliver them. They meet up with another professor, who advises them of countries to visit. These include Cuba, Bali in Indonesia, and Bulgaria, with discussions of the merits and drawbacks of each. Back in Rome, Giorgietto visits his daughter and chats with her. Inside a bar, “il Professore” meets a former student. With a list of what he will need in terms of documents, Giorgietto walks down a street, captured in a lovely long shot, then seems uncertain and turns around. His next stop is the bank, where he inquires about his savings. The bank clerk explains that because of the recession, his funds have not earned much interest, and anyway it will take 30 days to receive them. It’s another example of the kind of challenges they face.

Attilio suggests that the Azores will be a good place to live. Giorgietto approaches his brother who runs a food stand and asks for a loan, based on the fact that he is supposed to own half the stand. No luck. One minor roadblock after another befuddles the men. Giorgietto’s daughter refuses to take his dog. A Brazilian woman tries unsuccessfully to teach the men Portugese, the language spoken in the Azores, so they enjoy a Brazilian meal instead.

None of these issues amounts to much, which is part of the humor. The three men meander from one problem to another over the course of a week. The professor decides to sell several of his books, but the photocopies he makes of them he alone insists are indecipherable. Opting for what’s cheapest, he buys bathing trunks, and heads to the beach with his daughter. His doctor concludes his health is fine except for a swollen liver from drinking. His brother insists he has to work for his share of the food stand, so he hires Abu, the homeless young man from Mali who showers regularly at his house, to help. Giorgietto buys a ridiculous number of scratch cards in hopes of a big win. On and on it goes. Each one of these activities turns out to have complications.

“Citizens of the World” is not only structured around the conversations that reveal the three men’s personalities, but it also finds humor in their attempts to move abroad. As they amble along, the viewer will watch their loony antics with amusement.

Information and tickets for “Citizens of the World” are available at mvfilmsociety.com.