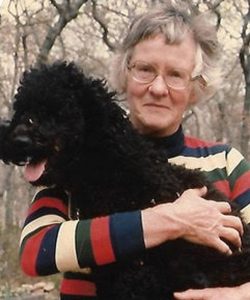 The quintessential Vineyard woman, Jean was feisty, fiercely independent, and fearless. Born on June 12, 1921, in Charlotte, N.C., Jean grew up in her father Edwin Hoffman’s home state of South Dakota before moving to Berea, Ky., where her father was a professor at Berea College and her mother, Mary Lindsay Hoffman, a librarian at the local academy. Jean attended Oberlin College in Oberlin, Ohio, and later studied at the Black Mountain College Summer Art & Music Institute in Black Mountain, N.C., under the attentive eye of Josef Albers.

After a brief marriage in the early 1940s, Jean and her son Michael moved from North Carolina to New York City, where Jean worked in the garment industry, hand-painting silk scarves. In the mid-1950s, Jean and Michael traveled on the last successful voyage of the Andrea Doria to spend a year in Geneva, Switzerland, with her late brother, Michael Hoffman, who was a foreign economics correspondent for the New York Times. While in Geneva, she relished hiking the Alps with her sister-in-law Catherine, and recalled one glorious evening where she crossed over to France and danced the rumba all night long with Harold Atkinson.

Upon returning to the States, Jean and Michael lived for a time in Washington, D.C., before returning to New York City, where Jean held numerous jobs in publishing with Random House, Knopf, and Condé Nast. In the late 1960s, after frequenting Martha’s Vineyard for many summers, Jean decided to move to the Island year-round. In 1967 she designed and built her home in West Tisbury, and married her late husband, Stanley Wexler. Over the years, Jean made frequent visits to New York City to visit Stanley in their New York apartment, as he was not a fan of Island living, and together they traveled to many countries, including Greece and Italy.

Jean continued working remotely, proofreading for the New York publishing houses, and discovered an enduring passion for gardening and surf fishing on the Vineyard. A close friend of Polly Hill, Jean adorned her property with many unusual plants and trees, including rhododendrons transported from North Carolina. A prolific writer, she kept extensive gardening journals, and wrote the “Vineyard Gardener” column in the Vineyard Gazette for more than 20 years.

In 1971, she co-wrote “The Martha’s Vineyard Cookbook,” now in its fourth edition, with Louise Tate-King. In the 1970s Jean also created a quirky gift shop named Beetlebung, whose namesake has now returned in a new iteration at its original location in Menemsha. In the 1990s, Jean was instrumental in creating the famed Dumptique at the West Tisbury dump, and she managed this pioneering recycling shed for many years.

The family is especially grateful for the devoted care Jean received at Windemere, as well as from the VNA over the years; and to the West Tisbury Library, which brought her great joy.

Jean was especially well-known around the island for her intense love of dogs, especially her many beloved poodles. Per her request, her ashes will be scattered over her dogs’ graves at the family home in North Tisbury, with a small celebration in spring 2021 while her favorite flowers, tulips, are blooming. The exact date will be announced at a later time.
Donations in Jean’s memory can be made to Doctors Without Borders at doctorswithoutborders.org, and all are encouraged to plant tulips or lilies in Jean’s honor, to fondly remember her vivacious spirit and love of the natural world.