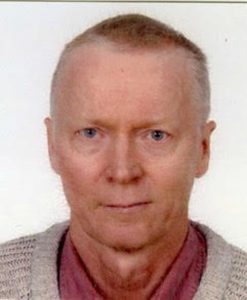 Mr. Wojnowski was born on August 7, 1944, in Czarnkow, Poland, and was very adventurous as a child and young adult. He lived in Italy for a time, and other European countries. He immigrated to the U.S. when he was 17 years old, to Maryland and enlisted in the U.S. Army infantry, and was stationed in Germany during the Vietnam era. He was honorably discharged as a sergeant from the Army Reserves in 1969.

Back home in the U.S., Mikolaj graduated from the University of Maryland with a bachelor’s degree in economics, and found work with the government.

He was a hard worker and a can-do kind of guy, and was very resourceful at mechanics, working on cars and lawnmowers, at home projects, and helping others. In his spare time he was an avid reader; he loved to fish, and passed this passion on to his children and grandchildren. He liked to relax at the beach, and would spend the whole day in the water. He was well loved by his wife, children, and grandson, as well as loving them back.

He was the husband of Jolanta M. (Dopierala) Wojnowski of 52 years. He was also the father of Alexandra, Stanley, and Bernard Wojnowski, and the grandfather of Jackson Wojnowski. He also leaves his brother, Jhon Wojnowski, and his family from Maryland, and was predeceased by a younger brother, Eugeniuse Wojnowski, in a terrible accident from which Mikolaj never recovered.

His funeral Mass was celebrated on Jan. 5 in St. Augustine’s Church in Vineyard Haven, officiated by the Rev. Michael Nagle. Burial followed in the Oak Grove Cemetery in Vineyard Haven, with military honors provided by the veterans of Martha’s Vineyard.

Arrangements are under the care of the Chapman, Cole and Gleason Funeral Home, Edgartown Road, Oak Bluffs. Visit ccgfuneralhome.com for online guest book and information.