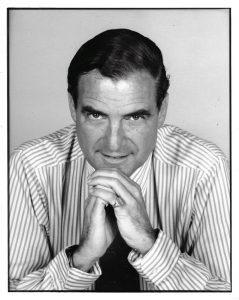 Tom was born in Pittsburgh in 1935, the first child of William and Virginia Mullins. Two brothers, Brian and William, followed. In 1953, while a student at the Hill School in Pottstown, Penn., Tom took a summer job as a substitute office boy at the headquarters of Gulf Oil Corp. in Pittsburgh, the start of a long relationship with the company. His father died during his freshman year at the University of Pennsylvania, from which he graduated in 1958. After a year of adventure in South Florida and the Caribbean, including clandestine flights into and out of Cuba, he returned to Pittsburgh and went to work for Gulf. His love of travel had been embedded, however.

In 1960 Tom met Corinne (“Coco”) McLaughlin of Lake Forest, Ill., who introduced him to Martha’s Vineyard, Lambert’s Cove in particular, where her parents had a summer home. After marrying in 1961, they settled in Pittsburgh, where their first child, Tommy, was born. In 1964, they moved to London, where Tom became assistant to the managing director of Gulf Oil (Great Britain) Ltd. Their daughter Brewer was born in London in 1965. Starting in 1966, they spent two-plus years in Beirut, Lebanon, from which Coco and the children had to be evacuated twice due to ongoing hostilities between Lebanon and Israel.

Back in London, the family settled into the comfortable life of Kensington, where their youngest child, William, was born. Tom continued to work for Gulf until the late 1970s, when he left to start his own consulting firm, Petroleum Advisory Services.

Life in London was exciting, glamorous, and fun, according to his children, and sometimes slightly mysterious. Both Tommy and Brewer recall slightly tipsy cocktail guests saying things like, “You know your father’s in the CIA, right?” They were instructed to smile and say nothing. Tom and Coco’s lives, both in London and Beirut, were “filled with great travel, wonderful friends, and endless dinner parties,” Brewer recalled. His children remember him as engaged in their lives and schooling, and “fiercely protective of us kids,” as Tommy put it. “He always had my back.” Brewer’s posthumous description of Tom would have delighted him: “He was loyal, he was funny, he was loving, he was vain, he was thoughtful, he had faith, he had dignity, he had grace, and we were so lucky to have him be our father.”

In London Tom was a member of the Royal Central Asia Society, the Royal Institute of International Affairs, the International Institute for Strategic Studies, and a fellow of the Royal Geographic Society and Institute of Petroleum. “He was a font of knowledge on an extraordinary range of subjects,” William said, “fueled by an insatiable and unapologetic curiosity. He traveled everywhere and picked up quite a collection of colorful contacts along the way.” No wonder his friends referred to him as James Bond and Cary Grant, not least because he was strikingly handsome.

When Tom and Coco decided to return to the U.S. in the early 1990s, they moved to Cambridge, where Tom became associate director of Harvard’s Center for Middle Eastern Studies. A colleague there, Sara Roy, now a senior research scholar at the center, said of Tom last week, “He was erudite and engaging, a gifted teacher and raconteur whose life experiences were as amazing as they were affecting.” He was a founder and the executive director of the Harvard Islamic Finance Information Program. In 2014, Tom was given a lifetime achievement award at the Harvard University Islamic Finance Forum.

Tom and Coco enjoyed Cambridge, and he took to his new job easily, though he sometimes chafed at what he considered the overly pedantic nature of academia. A side benefit was the proximity to the Vineyard. Tom loved to sail Vineyard Sound and nearby waters on his Vineyard Vixen 34, Nakhoda (Persian for master, as in captain of a ship), or zip over to Tarpaulin Cove in his Boston Whaler.

Their stateside honeymoon didn’t last long, sadly. Within a few years, Coco was diagnosed with early-onset dementia. She died in 2001.

Tom continued to travel after his retirement, particularly to the Middle East, where he lectured on tours sponsored by Harvard and the Smithsonian Institution. He served the latter as a lifetime board member, as he did the Woods Hole Oceanographic Institution. His wanderlust was only curtailed by an advancing case of Parkinson’s disease, which he fought until his death with a determination and acceptance that amazed everyone who knew him. Despite his limitations, he went to Cuba and Alaska and, until three years ago, to France and Greece with his devoted partner, Julia Norman, whom he met in 2008. At home he took up painting under the guidance of Val Estabrook. He had shows at the West Tisbury library and the Vineyard Playhouse, and one of his paintings is included in the Martha’s Vineyard Hospital collection.

From a collection of quotations he kept, one from George Santayana captures the essence of Tom: “A man’s feet must be planted in his country, but his eyes should survey the world.” A dedicated patriot with a sense of adventure and unfaltering curiosity, Tom not only surveyed the world, he acted on its stage, visiting or working in 34 countries in Europe, 16 in Africa, and 30 in Asia.