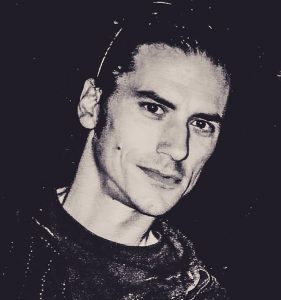 Frank was born on May 26,1965, in Washington, D.C. He graduated from Kennedy High School in Montgomery County in 1983, and later attended Montgomery College in Rockville before finding his calling in music.

Frank had many talents, but his real passion was for music. Frank took piano lessons at a young age, but was otherwise self-taught, and able to play any instrument handed to him. Frank would spend most of his life in pursuit of writing, recording, and playing original music for his own enjoyment and for live audiences. Frank archived all his written music, lyrics, and concepts generated by him over decades into a collection of monumental proportions. Frank’s musical talent and theatrical performances led him to become a much-loved persona in the Baltimore/Washington music scene. He was a member of several bands over the years.

Frank’s brilliant mind spent little time at rest, leading him to study and write about sports statistics, logistics, and all things related to engineering and mechanics. There’s not a sport that Frank didn’t love, including bowling, at which he was a winning league competitor as a teen. He also loved to swim, and became a lifeguard at a young age. Frank would also develop an interest in auto mechanics, and worked/trained at Freightliner and several other mechanic and machine shops during his life. Frank’s persistent job was as a driver-courier, which gave him the flexibility he needed to pursue his music career. During his work as a driver, Frank also developed a strong desire to work in transportation logistics due to the operational inefficiencies he experienced while on the job. Unfortunately, he did not have a chance to bring his ideas to market before his passing.

In 2010, Frank married Sherry Auxier, the love of his life. As much as he loved to tour as a performer, Frank also loved the cozy comforts of being at home with his wife. He loved Sundays with the slow cooker doing its thing in the kitchen, having a game on the TV, and enjoying the simple pleasures of doing the Sunday crossword or picking at his guitar.

During his too-short life, Frank’s heart of gold touched the lives of those who knew him and those who were lucky enough to experience his musical and many other talents. Frank has left a prominent void in his wake.

Frank is survived by his loving wife Sherry, her sister Jennifer Auxier, and their parents Sam Auxier Jr. and his wife Carol; by his father Frank J. Errera Sr. and his wife Wendy; his sisters Mary Leggit and family, and Deborah Valentine-Errera and family; his brothers David Errera and family, and Earl Errera and his children; his birth mother Virginia Coutinho of Martha’s Vineyard, and her son J. Gregory Coutinho, Frank’s half-brother. Frank was preceded in death by his mother, Norma J. (Donaldson) Errera, and birth father John G. Feazell. Frank is also survived by his lifelong dearest friend, fellow musician and bandmate Mike Draper.

Loving him dearly, our only comfort comes in believing that he is now at peace. A celebration of Frank’s Life will be hosted in Baltimore in the coming weeks, with a date, location, and time to be determined.