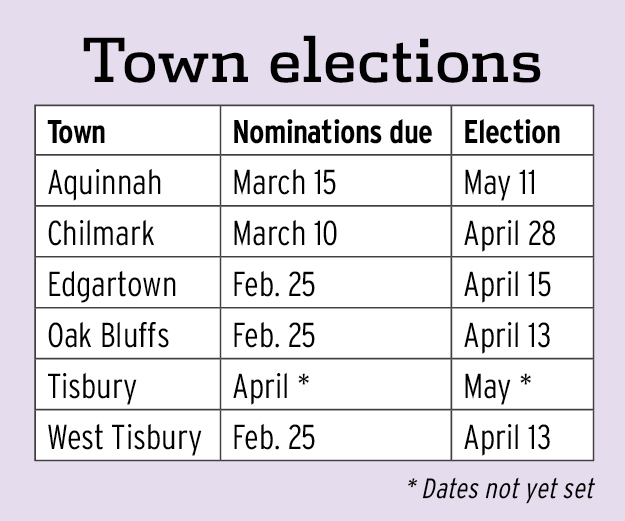 “I’ve been doing this for 18 years,” Newman said, “and I want to go in a different direction with how I spend my time going forward.”

Thus, community members who plan to participate in the Aquinnah election will not be running against the incumbent. The election is set to take place on the second Tuesday in May, May 11. Interested parties can pick up their nomination papers now from the town clerk, and must return them no later than March 15.

Smadbeck, who has served in Edgartown for nearly 26 years, is running for re-election. April 15 is the current date set for that election, and community members seeking to run against Smadbeck can return nomination papers by Feb. 25.

The incumbent board member in Chilmark, Rossi said he plans to run. “Being a selectman has become a part of what I do,” Rossi said, “and I don’t want to end my term during COVID and not be able to meet with people personally.” He also emphasized his desire to continue working on numerous projects he has begun, including the firehouse and Tri-Town Ambulance proposal, and see them through to completion. For those interested in running for selectman in Chilmark, nomination paperwork is available now, and should be returned no later than March 10. The election is currently set to take place on April 28.

Rogers, who is finishing his first term on the Tisbury select board, said he is also planning to run for re-election. “I want to keep working on the things I’ve been working on,” he said. “I enjoy the job, and want to continue.” On Tuesday, the select board set the date for the town election, which is usually held in early May, for June 22. Nomination papers will be due May 4, town clerk Hillary Conklin told The Times.

The West Tisbury election is set for April 13. Nomination papers are also available now through the town clerk, and are due back by Feb. 25. Incumbent Skipper Manter, who’s up for re-election this spring, is also planning to run again, and stated his enthusiasm about being back on the ballot.

There are two selectmen in Oak Bluffs whose seats are up for re-election in the spring election. Balboni and Coogan both said they’ve not yet made a decision on whether to run. This spring marks the end of Balboni’s first term on the board, and he told The Times he is considering a run for a second term. Coogan, who is completing his 18th year on the board, said he is undecided about running for another term. The Oak Bluffs election is scheduled for April 13, with nomination papers due Feb. 25.