Peter Bogue Van Tassel of Edgartown passed away at his home on South Water Street on June 1, 2020, at the age of 91. 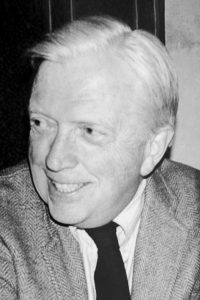 Peter was born on Dec. 29, 1928, to parents Chester Burroughs Van Tassel and Alma Ruth Bogue Van Tassel, in White Plains, N.Y. He was the grandson of Charles Conklin Van Tassel and Martha Young Van Tassel, and Morton David Bogue and Anna Tefft Bogue, all of Brooklyn, N.Y. Peter grew up in Scarsdale, in a historic rambling farmhouse named Farm End. The property, now known as the Fisher–Van Tassel House, included the first privately owned paddle tennis court in the country. Peter’s sisters, Gretchen and Katrina, were considerably older than he — in many respects, he was raised as an only child.

Peter graduated from Hotchkiss School and Yale University, class of 1950. He attended the Royal Institute of British Architecture in London, then returned to Yale, earning a master’s degree in architecture.

From New Haven, Peter relocated to New York City, where for years he lived on the Upper East Side. He spent much of his career at the architectural firm Skidmore, Owings & Merrill, working on “interior programming and coordination of installations” in commercial buildings. Mid-century modern was the style of the time, characterized by clean, simple lines, and integration with nature. Peter spent two years living in Brussels, Belgium, working on SOM’s Banque Lambert project. He ended his professional life in NYC working for Scalamandré, a high-end fabric and design firm.

Peter was an avid reader, reading and rereading a broad range of classics and other favorites. His library was full of literature, history, European and British architecture, and art. Reading the daily New York Times cover to cover was a lifetime ritual. He was a meticulous dresser, and a fastidious organizer of pretty much everything in his household.

One of Peter’s passions as a young man was travel — specifically to Europe — and judging from his letters and diaries from when he was in his 20s and 30s, he did so as often as possible, usually traveling by ocean liner (including the Queen Elizabeth and SS Rotterdam). His days and nights in Europe were packed with touring, museums, art, architecture, concerts, plays, and an extremely active social life. One of his journal entries recounted a day spent in Oxford and London, and included the following: a college party, a sherry party, lunch at the Roebuck Tap, a Vienna Boys Choir concert at the Royal Albert Hall, and dinner out — each event involving a different entourage. Peter was an avid opera buff, and his list of live performances contains 50 entries, from his travels abroad as well as at home in New York City. One highlight of his time in London was attending the 1953 coronation of Queen Elizabeth II, where he viewed the royal procession from the Ritz Garden, Piccadilly.
Peter chose to live alone, and wouldn’t have had it any other way. He was a creature of habit, making his bed perfectly every morning, followed by a breakfast of orange juice, milk, yogurt, and a banana. Lunch and dinner generally came from the deli at the A&P, and his days always ended with a couple of stiff vodka and sodas. As much as he appreciated fine dining, Peter had no interest in cooking, taking the lead from his father, who famously didn’t know how to boil an egg. He had no use for television, and never owned a cell phone or a computer. Known for his loyalty, consistency, and pithy sense of humor, Peter was quite matter-of-fact, to the point of being abrupt at times. But he cherished his family, his home, and his sense of place in society. After his death, it was discovered that Peter, the last of his Van Tassel line, had been keeping up a family diary that was started generations ago — a precious record for generations to come.

Peter’s connection to Martha’s Vineyard dated to the late 1930s, when his parents initially rented in Edgartown. In 1943, they purchased the Sanford House on Dunham Road, which was affectionately known as Pinkletink by the Van Tassel family. In a letter to his mother in 1945, Peter wrote, “Your darling little house leaks like a sieve. We’ve been having a Northeaster (Aunt Anna insists it’s a hurricane), and we were nearly flooded out.” He goes on to list, in great detail, the location and extent of each and every leak, and then commented several days later that “our garage has turned pea green from the leaves since the storm.”

In 1955, the family purchased the Earle House on South Water Street, and a piece in the Vineyard Gazette at the time called it “one of Edgartown’s oldest houses. The house was moved to its present site (via oxen) many years ago, and the story is that the gear broke, or at any rate the moving came to an unintended halt, and the house was left on the site it has since occupied.” The house was in extreme disrepair, the yard overgrown. Peter served as architect for a complete renovation of the house, which included an addition. “From an ancient, crumbling vestige of the sturdy cottage it once was, it has become a solid structure which retains the flavor and charm of the old dwelling.” Once the work was completed, his parents, Alma and Chester, retired to the Vineyard from New York. Both houses became hubs for three generations of Van Tassel/Shaw/Wuerth family summer activities and memories. Mornings were usually spent at the Bathing Beach (now the Chappaquiddick Beach Club). Then it was back to the South Water Street house, where afternoon tea was served at 4 pm, cocktails at 6, and dinner at 7, followed by reading and board games in the library.

After his parents died, Peter inherited the house on South Water Street. In 1988, just as his parents had done 30 years earlier, he left New York and retired to the Vineyard. During his retirement years, Peter kept himself very busy with a variety of paying and volunteer jobs. These included the Granary Gallery, Book Den East, the Edgartown Library, M.V. Preservation Trust, and 15 years in the library and archives of the Martha’s Vineyard Museum (which was the Dukes County Historical Society when he began working there).

Peter also kept up his active social life. He was a regular participant in and “keeper of the guest list” for the Thursday night supper club, and looked forward to the “bring-a-can-of-soup” gatherings at the (winter) Edgartown Yacht Club. Peter was a regular, alone or with companions, at Sam’s Restaurant in downtown Edgartown. He enjoyed a close network of neighbors — nearly all of them widows: with Peter being the lone male, the story goes, he was affectionately named “rooster” of the group.

In his later years Peter suffered from more than a decade of dementia and other health complications. He spent his time napping in bed and reading the New York Times, as he’d always done. His niece Alison Shaw and her wife Sue Dawson oversaw his care, along with a dedicated, patient, staff of caregivers and helpers — most recently, with our thanks and gratitude, Greg and Leo.

Peter was predeceased by his older sisters, Gretchen Van Tassel Shaw and Katrina Van Tassel Wuerth, and his longtime partner Daniel Sullivan, who lived near Sheriff’s Meadow and is memorialized by a bench there. At the time of Peter’s death, he was survived by two nieces and five nephews: Alison, Stephen and Michael Shaw; Christopher, Jonathan, Peter, and Megan Wuerth; and their families. His niece Megan Wuerth died in December 2020.

Peter’s ashes will be in the Tower Hill Cemetery alongside his parents, his sisters, and his brothers-in-law, and near his partner Dan. Interment will be a private family ceremony. The family asks, with gratitude, that donations in his memory go to the Martha’s Vineyard Museum.